I like video poker, it’s fast, it’s easy – practically self-explanatory – and it combines two of my favourite games – slots and poker. I think I’ve spoken about this already – it becomes hard to say when you’ve written so extensively about online and mobile casino gaming - the lines all blur sometimes. But I figured that as I am about to speak about Aces and Eights, a well-known video poker game, that I should make a brief mention of the game’s history.

How Did Video Poker Emerge?

Video poker was the brain child of a bunch of PC students who used to play the game on what can only be called prehistoric computers way back in the 1970s. In fact, the game was actually a by-product of the then emerging home computer market. I’m talking about dot-matrix screens which were black and green in colour and graphics so rudimentary that I’m not sure one could have called it graphics at all back then. Ping-pong comes to mind – two slabs and a dot.

Anyway, these were the conditions that created video poker. Needless to say the game proved popular and grew at a rapid rate and to the point that by the mid-1980s the game had made its way onto casino floors. When the online casino movement began, online video poker was one of the first games snapped up and made available. Video poker proved very popular, which is why today there are so many variations, which of course brings us to Aces and Eights!

Aces and Eights is available in both its traditional online video poker format and its more recent mobile video poker format. The game takes place between you and the dealer and is conducted, or played if you will, using a 52 deck of cards. It’s all so very easy. On the screen you’ll be able to see all the hands and their payouts and then it really just becomes a case of seeing if anything you have matches what’s above. The dealer dispenses with the cards – five in total – and then you take a look to see if there’s anything that could score you a win and if not, you click or touch on the cards you’d like to keep. Once you’ve chosen what you want to keep, the dealer will take those cards away and issue new ones in their place. What you have then will be your final hand. Below is a copy of the standard Aces and Eights Video Poker payout table:

And that’s really all there is to it. Aces and Eights Video Poker is not a complicated game, in fact, no casino game is actually complicated. If you’ve ever considered a casino game to be complicated, it’s just the way you’ve perceived it. Once you read the rules, everything changes. There are minor strategies that you can use when playing this game based on the hands you are dealt. Key in a Google search, the net is awash with them, and who knows, they might just improve your game. 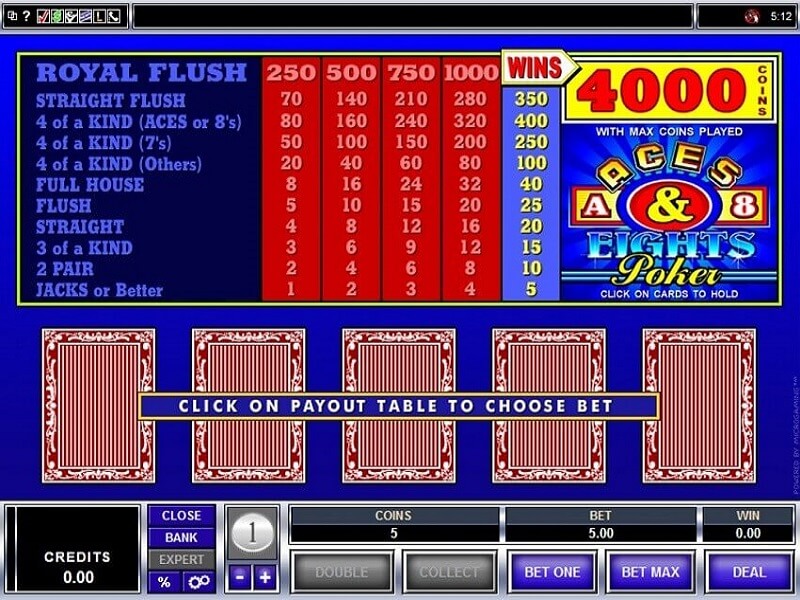