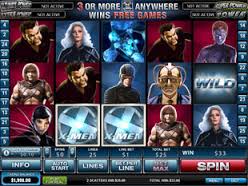 In some of the most exciting news we’ve heard this month, one of our favourite Marvel Slots is back and it’s more X-hilarating than ever before.   Playtech’s Marvel Slots have proven to be some of the most popular online Casino games ever, and we expect that the new 50 line version of the X-Men Slot will be no exception. The earlier edition was stacked with features but limited to online 25 paylines, so the new format will give players even more wagering opportunities and better chances to win big bucks, including the Marvel Progressive Jackpot.

The 50 Payline X-Men Slot features the classic characters from the comic books and film franchise, all of whom are easily recognisable thanks to their distinctive attributes as well as their resemblance to the film actors who played them! These characters take the place of the traditional Card symbols on the wheels and include the Heroes, such as Professor Xavier and Wolverine, and the Villains from Magneto’s Brotherhood of Mutants. What sets this Slot apart from many other popular games is the Free Spin feature, which pits good against evil in a furious battle and usually ends up being very profitable to anyone playing!

Entry into the Marvel Progressive Jackpot can be triggered at random after any spin and leads to a mini-game which could see you landing one of four top Jackpot Prizes. Winner Casino is a first-rate online and mobile Casino that features fantastic online Slots as well as some of the best table games on the web. If you join today you’ll be able to claim an X-cellent CA$2000 Welcome Bonus to boost your balance and help you battle your way to victory.