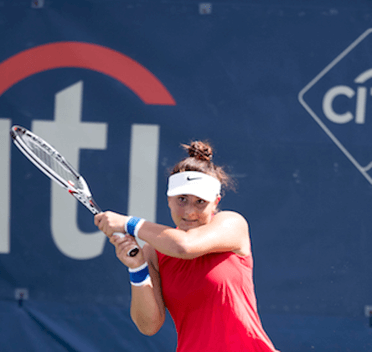 One of Canada’s brightest and youngest tennis stars, Bianca Andreescu, has announced that the foot injury she sustained during the final of the Miami Open on Saturday will prevent her from competing in Canada’s upcoming tie at the prestigious Billie Jean Cup.

Taking to her Instagram account to connect with fans, the 20-year-old from Mississauga, Ontario assured her concerned followers that the injury is not severe but does require her to sit this event out.

Andreescu was forced to end her best tournament since winning the US Open title in 2019 when she tumbled to the court and struggled with her movement after falling. She wore tape on her right ankle for the duration of the final match of the WTA 1000 event, which was just one level below a Grand Slam.

Not Able To Go On

While in the midst of the final, Andreescu called for a medical timeout to receive treatment from a trainer. She was then able to return for one more game but was not able to move well at all. At the time, she commented that it was definitely not the way she wanted the tournament to end, but that she was grateful, nonetheless. She added that she had reached the final of one of her first tournaments in a while and couldn’t be happier. Australian Ashleigh Barty then went on to claim the title after Andreescu trailed behind with a score of 6-3, 4-0.

The Miami Open was Bianca Andreescu’s third tournament of this year, following a 16-month layoff. The player had sustained a serious knee injury at the 2019 WTA Finals, leading to an extended hiatus from the court.

Andreescu added that she loves representing Canada in international tennis tournaments, but she needs to take the time out to rest and recuperate so that she can return to the game healthily and safely for the upcoming clay-court season. The Canadian tennis star is currently ranked sixth in the world behind Ukraine’s Elina Svitolina, USA’s Sofia Kenin, Romania’s Simona Halep, Japan’s Naomi Osaka and Australia’s Barty at the top of the log.

The Billie Jean Cup, formerly known as the Fed Cup, is the world’s premier international team competition in women’s tennis. Canada is scheduled to face off with Serbia in the playoffs taking place on 16 and 17 April of this year. The tournament is being held in Kraljevo, Serbia.

Love BETTING on tennis? Get the BEST odds online!