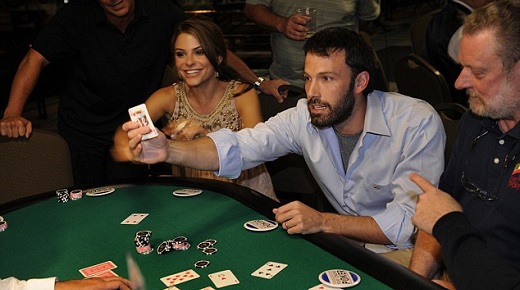 He’s just too good! Ben Affleck may be one of those actors that you either love or hate, but there’s no denying the man’s got skills – and we’re not just talking as an actor/director/future superhero. Ben Affleck is in fact renowned for his love of Casino games and he recently even managed to get himself banned from a Blackjack table for winning too much.

The star of Good Will Hunting and the future Batman has been banned from playing Blackjack at the Hard Rock Casino after it appeared he was winning too much. A Casino security persona approached Mr Affleck and quietly requested that he stepped away from the table, whispering, “You are too good at this game.”

Not wishing to cause a scene, Ben Affleck courteously did as he was asked and was reassured that he could play any other game he chose at the Casino, but not Blackjack. Supposedly the top actor had not been able to disguise the fact that he was counting cards, proving that maybe he is not the brilliant actor some claim him to be.

Counting cards is not technically illegal but it is, for good reason, disliked by Casino owners so security staff are always on the lookout for such behaviour. The Hard Rock Casino has assured that Mr Affleck is not banned from the premises and is welcome to return at any time, stating, “Mr Affleck, a valued guest of Hard Rock Hotel & Casino, is not banned from our property and is welcome back any time.”

However, since his Blackjack ban from the Las Vegas-based Casino, Ben Affleck has been spotted playing Blackjack at Casinos in Detroit where he is currently filming the new Batman vs. Superman film. Sources have revealed that Affleck has been playing Blackjack alone in a room set aside for high rollers. Rumours suggest that he has been playing with chips worth between $500 and $5,000 and so far has made some significant winnings.

Think you could rival Ben Affleck at the Blackjack table? Test out your winning strategy today at Betway Casino and claim a Welcome Bonus up to CA$1,000!