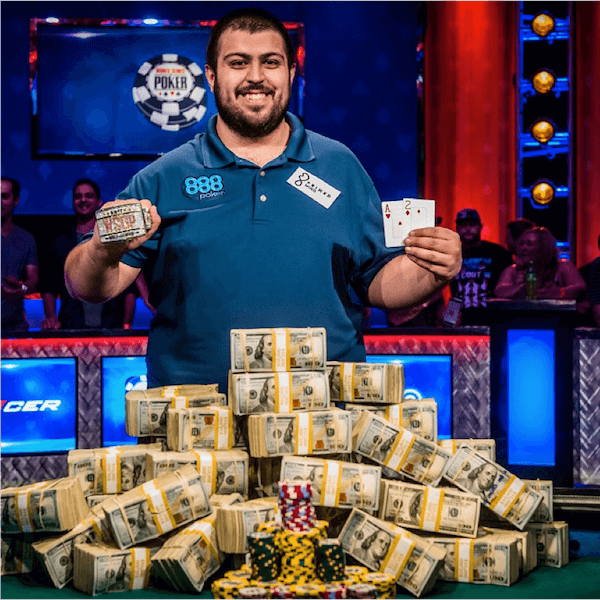 25-year-old professional poker player Scott Blumstein played his first World Series of Poker Tournament just a few weeks ago. The New Jersey resident participated in the 2017 Main Event, progressing through over 7,200 initial entrants to take home a grand $8.15 million prize along with a champion’s bracelet valued at another $500,000. It was on his 256th hand of the WSOP Main Event’s final table on Sunday that Blumstein won against Pennsylvanian native Dan Ott, becoming the new world champion in the world of professional poker. Blumstein revealed to reporters after the event that he was still in shock, and that he thought that he would be far more emotional than his real-time reaction belied. Despite this, the winner noted that his victory was ‘just the best feeling’ – so much so that he admitted he could not put it into words.

Blumstein was well-known as an online grinder in New Jersey, through which he made his living. However, this was the first time that the player had ever visited the Las Vegas Rio to play in one of the World Series events. With the November Nine event format recently dropped in favour of three segments of final-table play, broadcasted with 30-minute delays on Thursday, Friday and Saturday by ESPN, Blumstein kicked off the new format final poker table with an impressive lead. The player had maintained this lead throughout the match, only losing it once when crowd favourite John Hesp briefly borrowed the title. Hesp managed fourth place in the event after a fast-paced game between French competitor Benjamin Pollack and the two American contenders, Ott and Blumstein himself.

Blumstein Confident That $8.15m Prize ‘Will Not Change His Lifestyle’

Pollack played a promising game, but was eliminated from the tournament with the Q-T, while Ott re-raised all in with K-9 from the small blind. It was here that Blumstein seized his opportunity, calling from the big blind with A-Q. Being ahead pre-flop, Blumstein could have ended the tournament there, but instead, adding a King to the flop sent Pollack packing and tripled up Ott. This move postponed the game’s final moments for another 60 hands or so, with Blumstein finally winning after playing solidly throughout the event. Ott was ahead with A-9 compared to Blumstein’s A-2 pre-flop, but one of the three deuces remaining hit on the river, granting Blumstein his new spot in the history of pro poker. WSOP’s latest champion has commented on his win since, saying that despite his massive $8.15 million in winnings being nice, it will not change his lifestyle much. After the win, the Temple University alumni told WSOP officials that just two weeks prior he had been an online grinder, and that nothing has truly changed now.