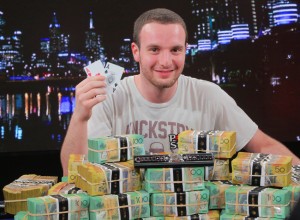 The Aussie Millions is one of the most prestigious Poker series in the global Casino calendar and the 2014 event was no exception. It is recognised as one of the largest starting events of the Poker season, attracting millions of eager players from around the world.

The tournament, which opened on 23rd January 2014 at the Crown Casino in Melbourne, has never before crowned a Canadian player champion, making this year an exciting first after years of disappointment.

In fact, when it came down to the last two players, a Canadian win was guaranteed as both Ami Barer and Sorel Mizzi are Canadian and had together managed to eliminate the remaining five players at the final table.

The prize pot of this year’s Aussie Millions tournament was a gold bracelet, in addition to staggering CA$1.6 million cash, bulked up from the 668 players who initially entered the competition.

The final hand was player with Barer sitting on a lead of more than double the number of chips held by Mizzi. Mizzi went all in on a Queen and an 8, hoping to get himself back in the game. However, Barer called with pocket Aces, forming a full house and winning the tournament.

Canada is fast garnering a solid reputation as one of the world’s best Poker playing nations, with many more Canadian Casinos now hosting World Series tournaments and, as Barer himself proved, many more Canadians receiving Poker prizes each year.