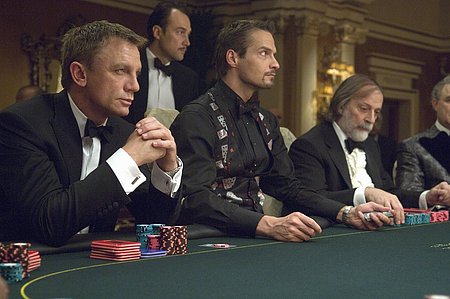 I wouldn’t usually consider myself to be a huge Bond fan, although some of the films have been reasonably watchable, but re-watching Casino Royale online last night I realised that I had forgotten – or perhaps never before noticed – just how incredibly gripping the movie is. Unlike many of the Bond films that came before it, Casino Royale is dark, edgy, somewhat humorous and, as any film located in a Casino should be, glamorous.

This contradiction of themes, I feel, reflects more accurately Ian Fleming’s creation than any of the previous film adaptations. It’s interesting now to look back at the initial reactions to Daniel Craig’s casting as James Bond in Casino Royale. Almost everybody thought he was a terrible choice for the iconic role – he looked nothing like the tall, dark and handsome man described in the novels – and one British newspaper even featured the headline “The Name’s Bland – James Bland.” However, when Casino Royale aired and fans and cynics alike went to view the latest Bond instalment, everyone was blown away by Craig’s portrayal of the young and somewhat troubled secret agent.

Casino Royale was Ian Fleming’s first Bond novel, a fact which enabled the screenwriters and Craig to develop a character that was ultimately rougher, less charming and, to be honest, less cheesy than previous Bonds. This new Bond was, chronologically speaking, the earliest Bond, so throughout the film the character was developing and picking up the characteristics that have become almost a tedious hallmark for the other films. My favourite line from the whole film I think best conveys my point here:

[after losing a lot of money in a Poker game at the Casino, speaking to the bartender] Vodka-martini.

If you don’t know why that’s funny and poignant then you must have been living under a rock for the past 50 years.

The film also bears a realism that many of the other films lose underneath all of the charm and cheese. The extremely high-stakes Poker game that Bond buys into at the Casino Royale in order to foil the evil Le Chiffre’s plan is extraordinarily thrilling. It perfectly depicts the intense highs and lows of Casino gaming when so much is at stake, as well as the adrenaline-fuelled excitement felt by all of those involved (including those of us sat at home watching the movie online, 7 years after its original release, hearts-pounding in our chests!) Of course it wouldn’t be right if Casino Royale didn’t include some of the staple features: a chase (the opening Parkour scene); some Bond girls (Eva Green as Vesper Lynd); and some serious product placement (Sony phones and televisions, Aston Martin, Omega watch, Heineken beer.)

Ultimately Casino Royale is a great Bond film because it is gritty, emotional and real, with just enough of a speckling of the classic elements to keep the traditionalists happy.