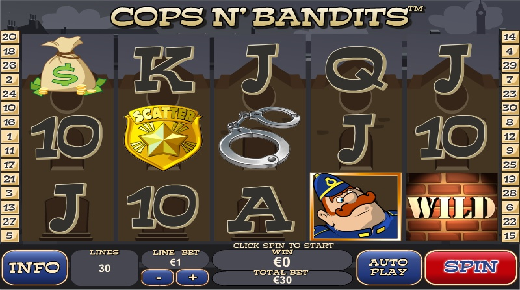 A popular online casino by Playtech, Casino Tropez, has recently offered an exciting new game that should appeal to low rollers and high rollers alike. Cops N' Bandits tells a story in a fascinating 3-D way about two robbers named Tiny George and Skinny Larry who are being chased by a cop named Slim McThin. Symbols on the reels of the game help to tell the story in an interesting way.

Some extra featured fun animations include Tiny George the bandit examining a diamond and Slim McThin the cop using a flashlight to search for the bandits. The game features a wild logo as a wild symbol and it awards the highest jackpot of 4,000 coins.

Another fun feature is a sack of cash that bursts open scattering cash. A bonus game called The Line Up is available on a second screen and features six criminals that the player can select. In an innovative twist to the game, when the player selects the wrong criminal, the payout is decreased and gets smaller with every succeeding incorrect choice.

There are also bonus games awarded to players when the bonus symbol appears on reels one, three and five at the same time. The police badge produces some extra added payouts and players are able to accumulate a total of sixty-five free spins.

With enough challenge for advanced slot players and fun and exciting features for beginners and low rollers, this game is likely to become a highly popular game among slot enthusiasts in this online casino. Line bets in Cops N' Bandits vary from .20 credits to 30 credits, allowing both low rollers and high stakes players opportunities for challenging play.

The game Cops N' Bandits is a 30 pay-lines game offering online players fun and excitement. At times, the bandit becomes a wild symbol and when a cop appears next to a bandit, he becomes an extra wild symbol and free spins are then offered. Casino Tropez is an online casino licensed by the Directorate of Offshore Gaming of Barbuda and Antigua.