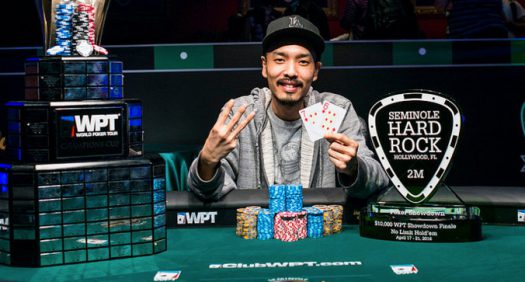 Professional player David Y. ‘Chino’ Rheem has claimed his third World Poker Tour title when he won the 2016 WPT Seminole Hard Rock Championship on 21 April. The event, held at the Seminole Hard Rock Café in Hollywood, had a buy-in of $10,000 and a field of 324 players. The competition was tough, but Rheem was able to hold out and win the $705,885 prize pot. In doing so, he became the fourth player ever to have won three WPT championship events.

Rheem joins Anthony Zinno, Gus Hansen and Carlos Mortensen in this exclusive club, having won the Doyle Brunson Five Diamond World Poker Classic in 2008 for $1.5 million, and the WPT World Championship in 2013 for $1.15 million.

Rheem's other big career wins include coming seventh in The World Series of Poker Main Event in 2008 and taking home the Epic Poker League title in 2011. He earned $1.8 million and $1 million for these performances respectively. In the recent WPT Seminole Hard Rock Championship, Rheem was up against US pro Aditya Prasetyo in the final event.

Prasetyo is the less experienced player, which may have contributed to him coming second. After just 39 hands, the final cards were dealt. Rheem was victorious and Prasetyo took home a very respectable $484,130. As well as the title and money, this recent win also earned Rheem 1,200 Card Player of the Year points and put him in a tie for fortieth position in the overall standings.

Rheem’s career has been full of ups and downs and has been very interesting to watch. He’s earned millions in live tournaments but has also dealt with several debt repayment and financial responsibility disputes. The Epic Poker League, now defunct, even put the Los Angeles native on probation after he allegedly failed to pay back debts that he owed to other players.

After his 3rd World Poker Tour win Rheem says he looks forward to the future and that his previous money woes are now firmly behind him. He wants to be respected for the way he plays and to move on from his past controversy. His aim is to build a legacy and to be accepted as good poker player, and with over $8 million in live tournament earnings he looks like he’s back on track and raring to go.