Comedian George Lopez Conks Out On Floor of Canadian Casino 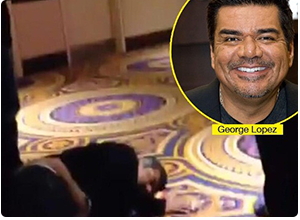 He’s usually a funny guy, but this time George Lopez was the butt of the joke after drinking so much at a Canadian Casino last week that he decided to take a nap – in the middle of the Casino floor! Although Lopez had been the star performer at Caesars Windsor Casino earlier that night, security had no choice but to call the police, who arrested the comedian for public intoxication.

Sources who were inside the Canadian Casino at the time have revealed that George Lopez wasn’t causing any trouble; quite the contrary, in fact, he just appeared to have mistaken the floor of the Casino bar for his bedroom!

The grey-haired funny man looked as peaceful as a sleeping baby passed out on what, admittedly, looks like a very comfortable gold and purple carpet. Neither the Casino nor Law Enforcement are pressing charges against Lopez for his minor misdemeanour – the police stuck him in what’s referred to as a “drunk tank” in order to sober up, before releasing him to return, red-faced, to the Canadian Casino where he was staying.

Luckily George Lopez was able to see the funny side of the whole incident, candidly revealing in a statement the following day “Tied one on last night. Not feeling great this morning. I was trying to sleep it off, unfortunately, it was on the Casino floor.”