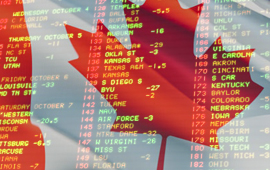 The number of Canadian online casinos has risen consistently in the last few years as online gambling has grown more and more popular. It has been estimated that more than 70% of Canada’s adult population indulges in some form of gambling or another, meaning there’s clearly plenty of room for the casino market to expand and diversify.

Sports betting and lotteries are amongst the most popular forms of gambling in Canada, but the popularity of Casinos is growing year on year, with more and more gamers choosing to wager online as opposed to in land-based casinos, as seems to be the trend worldwide.

The global annual online gaming market is worth billions of dollars and Canadians contribute considerably to this figure.  Canada is the home to many leading gaming software developers and the Kahnawake Gaming Commission, so it would surely come as a surprise to many that the legal status of online gambling in the country remains ambiguous.

In 1892 The Canadian Criminal Code prohibited gambling in any form, but this was later relaxed to allow gambling for charitable purposes. Since then provincial governments have established Gambling crown corporations to regulate gambling activities, due to complications in the jurisdiction rights of Canadian gamblers playing in offshore online casinos.

The government handed every province the right to regulate online gaming, so legal guidelines now vary from province to province. Provincial governments have recognized the potential for revenue from online gambling and consequently softened their approaches to the matter.

Researchers at Concordia University and the University of Montreal recently surveyed almost 12,000 people in the Montreal area about their gambling habits and found that 70% had spent money in the last year on lotteries, Slot machines, video lottery terminals and Poker.

With such a considerable percentage of the adult population vying for the freedom to indulge in legal and regulated online gambling at their leisure, surely it’s only a matter of time before the Canadian Government takes note and gives their residents what is so clearly desired.