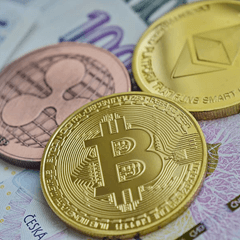 A recent survey conducted and released by Skrill indicates that the incredible rise in the popularity of digital currencies as a means of tender for online casino Canada and global use continues to rise. In fact, so indicates the feedback, at least 38 per cent of participants indicated that they’ve either invested in or purchased a form of digital currency.

In addition to those already riding high on the cryptocurrency movement, a further 84 per cent of survey participants indicated that they’d heard of at least one brand of crypto, with 64 per cent more stating that they recognise Bitcoin to be a form of digital currency.

According to a comment made by Rossen Yordanov, Senior VP at Skrill and Neteller, which form part of the Paysafe group of digital payment solutions often available at online casino Canada, the adoption of cryptocurrency into the mainstream payment’s arena could not possibly have been foreseen or even imagined as recently as only two years ago.

Crypto as a means to transact is no longer a “niche” market or trend, explained Yordanov, adding that the research recently conducted by Skrill only emphasises the fact even further by providing actual survey-based evidence.

The research also clearly indicates that there remains much space and even a need for further education in terms of creating a more widespread awareness about the potential of digital currencies for the making of payments and/or transfers.  Skrill is currently working hard at making it easier for people all over the world to buy and sell cryptocurrencies by using Skrill and Neteller as platforms, added Yordanov.

Education The Key To Adoption

In addition to Bitcoin, which is currently the most widely recognised digital currency out there, others such as Ethereum, Stellar, and Dash, were also recognised – and by around 10 per cent of the respondents.

Currencies like Tezos, Atom, OMG, Kyber Network, Ox, and Chainlink, faired only marginally poorer, with 8 per cent of respondents having indicated an awareness of their existence.

Play for REAL MONEY! Sign up at a top casino online.

As one of the world’s leading online slots game providers, Yggdrasil can always be counted upon to drop surprises for players to lap up every no