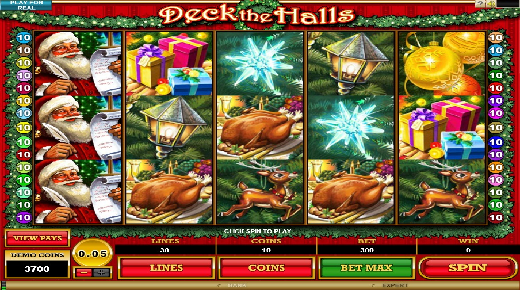 This is one of the more popular of Microgaming’s festively themed games and boasts a highly appealing range of features to entice tournament players, which will keep them entertained and climbing the Leader Board. Deck the Halls is a 5 Reel Slot with 30 Paylines, giving players plenty of scope to create winning combinations. The Deck the Halls logo symbol is Wild and will substitute for all other symbols, with the exception of the Scatter, and also functions as a Stacked Wild within Free Spins. The Santa Symbol is a Stacked Wild within the base game and Free Spins. There are up to 2,400,000 coins up for grabs in the Free Spins Feature, which is triggered by the golden bells Scatter symbol.

Do remember, when playing in a tournament credits become points and will determine your position on the leader board, not your final prize money. In a recent statement, a spokesperson for Microgaming explained that Deck the Halls “...captures the essence of the festive season, featuring Christmas trees, Santa Claus, log fires, reindeer, roast turkey and gift stockings.”. It’s really no wonder this was the game selected to join the tournament network at the height of the Holidays. Deck the Halls is the eleventh game to join Microgaming’s ever-growing tournament platform. The Head of Casino at Microgaming, Mike Hebden, offered his rationale for their latest game selection: “The addition of Deck the Halls will certainly enhance our multi-player offering”.  He expressed his belief that multi-player tournaments provide a dynamic and interactive experience for Slot players along with the opportunity to win big for small stakes. He also stressed that more games would be added to the tournament selection in 2013, so there’s plenty for fans to look forward to in the New Year.

The first Deck the Halls tournament kicked-off on 7th December. The tournament uses Microgaming’s tried and tested Accumulator format and runs throughout the whole of December. The guaranteed prize pool will be split at the close of the tournament between the top 75 players. The biggest and most lucrative tournament hosted by Microgaming each month is their Monthly Monster. This month it will be played on Deck the Halls, so from 21st December players can spin the Reels to accumulate points in hopes of finishing at the top of the leader board. The Monthly Monster’s guaranteed jackpot is generally the largest in Microgaming’s tournament calendar and December’s prize pot is even bigger than usual! The top 40 tournament players will split the $30,000 guaranteed prize pot and enjoy a welcome Christmas present of cash.