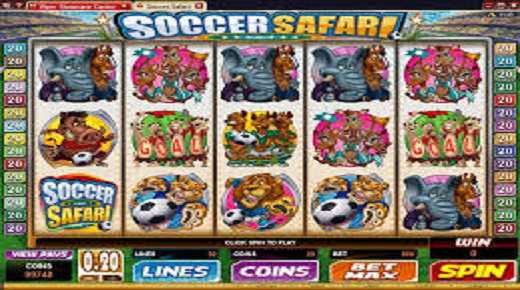 Spin Palace casino has seen a recent surge in popularity on two of its football themed Slots. Whether it’s the 2012 Games that have inspired the sporty spirit in casino players or a mere coincidence, Soccer Safari and Shoot! have featured more regularly than ever before in Spin Palace’s list of big payouts in the last few weeks.

Soccer Safari crops up again in Spin Palace’s list of recent winners on 5th August, 2012, as one lucky player won a total of €4,160 across Hot, Ink Soccer Safari, Lucky Witch and other games. Whatever the reason for the rise in popularity of these games, it goes to show that any Microgaming game available at Spin Palace casino could award you a massive pay out at any time.

Whilst leading casinos are very good at making a big buzz around their latest game releases or most consistently popular titles, such as The Dark Knight™, Hitman, Thunderstruck II and Immortal Romance, that’s not to say the other games in their collection should be overlooked. In a casino such as Spin Palace there are hundreds of different games to choose from, so take some time to browse their collection and you might just find a game that appeals directly to your personal interests and gaming preferences.

Of course it is football fans that are most likely to take an interest in Slots Soccer Safari and Shoot!, but even if you’re a complete sport phobic, you can still enjoy the big thrills, impressive features and cash prizes these games have to offer. Soccer Safari is a 5 Reel Slot with Wilds, Scatters and a Go For Goal second screen Bonus feature to add to the excitement of the main match.

Choose an animal to take the penalty kick and if you score you’ll be awarded a massive multiplier to boost your balance. Even if you miss, a smaller consolatory multiplier will be yours, just to make you feel better! Shoot! also packs plenty of fun and profiting potential into one game. 50 paylines, Wild symbols and a Trade ‘Em Bonus round in which you must select 4 trade cards to win entry to two further Bonus games do not disappoint.

Up to 35 Free Spins with doubled payouts are up for grabs and the Magazine Bonus gives you the chance to accumulate plenty of Bonus credits up until you draw a red card. You can play Soccer Safari and Shoot! now at Spin Palace or any other casino within The Palace Group. Take a strike at the big cash prizes and you might be pleasantly surprised by your gaming success.