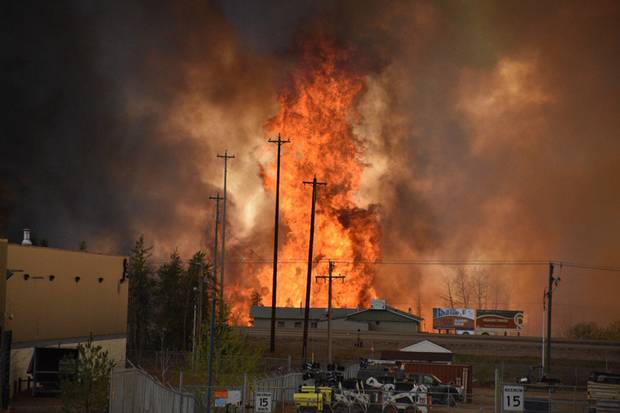 With the Fort McMurray wildfire still raging and an estimated 579,946 hectares already devastated by the blaze, there’s an on going need for financial relief and assistance. To date, more than 2,400 homes have been lost, thousands more have been deemed unsafe for habitation, and over 88,000 people have been displaced. The fire continues to burn out of control and has spread from Northern Alberta into Saskatchewan, majorly impacting the Athabasca oil sands operation, and costing the country millions. It has been estimated that the wildfire may become Canada’s most costly disaster and that it could take years to rebuild and recoup losses.

Fortunately, support has poured in from across the globe, and countries as far away as South Africa have sent teams of fire fighters to assist in quelling the blaze. The international response has highlighted just how severe the fire is, and how it has affected not only those in Canada, but far further afield. 300 South Africans from the Working on Fire program recently made headlines when they landed in Alberta, as they are the largest group of S.A fire fighters ever to be deployed internationally. Aid from other countries, in particular the USA, has also been forthcoming, with America initially sending an extra 200 fire fighters to Canada, followed by several hundred more.

Currently there are over 2,500 fire fighters battling the blaze, with almost half of this number made up by international responders. According to the Canadian Interagency Forest Fire Centre, this mobilization represents the largest group of fire fighters ever brought into Canada and is a clear indicator of just how strong international support has been. In an effort to raise funds, a number of initiatives have also been set up, and recently, Justin Trudeau, Canada’s Prime Minister announced that the Federal Government would match all individual charitable donations received by the official relief fund set up by the Canadian Red Cross, to assist those affected by the fire.

Trudeau rallied the federal leaders to set aside their political differences and stand behind the people of Alberta as they rebuild their lives and their town. He had realized that aside from providing much needed emergency resources, financial aid would be an essential and that the federal government could certainly assist. His announcement of matching all Red Cross donations came the day after the Alberta government had also pledged to match donations to the relief fund http://www.cbc.ca/news/politics/fort-mcmurray-federal-response-red-cross-1.3567828, and had provided $2 million in seed money to get the operation off the ground.

To date, over $11 million has been raised and donations are still pouring in. In an effort to lend a hand to the Fort McMurray relief efforts, GamblingInsider.ca is set to make their own donation to the appeal. For the whole month of June, $1 will be donated for every new player that signs up and makes a deposit at a recommended casino. With more than 10 casinos to choose from, players can pick the brand they prefer, sign up and make a deposit, and $1 will automatically be donated towards relief efforts.

At this stage every dollar helps, especially since the return of the first group of Alta based residents to their homes was delayed, after traces of toxic substances such as arsenic were found in ash. The toxicity of the ash and its risk to public safety has hampered more than 2,000 residents re-establishing themselves in their hometown, and officials have said that they may only be able to give the all-clear as late as September. In the interim, residents are being housed in various locations and have been provided with essentials thanks to donations made by the government and public.

Canada’s government has been incredibly grateful for the outpouring of support that’s been shown since the fire first broke out on May the 1st  and has applauded the efforts of those who have assisted in whatever way possible. Thanks to individuals, the Red Cross, the government, international responders and entities such as GamblingInsider.ca, there will be some respite for those affected by this enormous blaze.