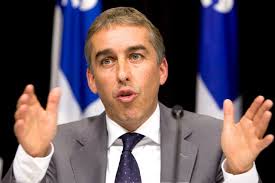 French Finance Minister Nicolas Marceau has been defending plans to permit the serving of alcohol within the gambling sections of casinos in Quebec. Summoned to explain his plans at the opposition-controlled National Assembly Health and Social Services committee, Marceau explained that his overall target was balancing the provincial budget.

Recent efforts to help balance the budget have included slashing higher education funds and the administration arm of health care. Also proposed are cuts to social assistance benefits - prompting much outcry - and the attempted reclaiming of $14.9 million from private subsidised day-care centres.

If vast amounts are not raised, Marceau informed the committee that Quebec would record a $1.4 billion deficit for 2013/14 and a projected $2.8 billion deficit in 2014/15. Thus, Marceau explained, specific alcohol licensing was one of the areas they were looking at to try and raise money to stop the deficit getting out of control.

Marceau and Health Minister Rejan Hebert showed how Loto-Quebec was losing market share to illegal casinos in other provinces that often provide free alcohol to players while they are gambling. Hebert said he does not dispute the criticism and concerns raised by public health authorities that alcohol could exacerbate tendencies towards ‘problem gambling’, but argues that the scientific evidence remains ‘unsubstantial and inconclusive’.

In addition, he said that Loco-Quebec are very good at helping problem gambling and can exercise a measure of control not found in competing regions. He also supported Marceau’s intention to make Quebec’s casinos more competitive, arguing that they were a ‘necessary evil’ whose tax payments could make a real difference to the deficit.

Quebec casinos are the only casinos in North America not to allow people to drink while they gamble, Marceau continued. A Quebecer on average spends $583 a year on gambling, well below the average of $770, and Quebec has a very low 0.7% rate of pathological gambling.

Loto-Quebec casino staff are trained to spot and stop intoxicated gamblers and ‘nowhere else has these safeguards’ Marceau said. Public health officials across the province unanimously opposed the proposition, with large parts of the medical council labelling the idea as an attempt to encourage those on low incomes to gamble, thus ‘taxing the most vulnerable’.