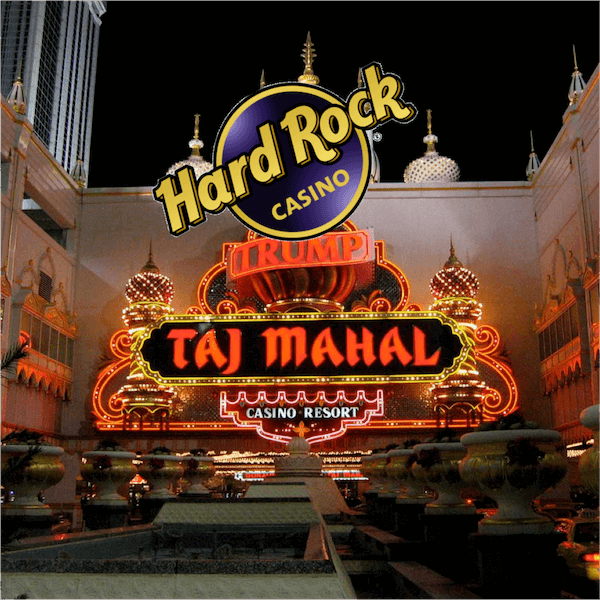 Hard Rock International is now set to open one of its brand new cafes in the newly revamped former Trump Taj Mahal casino, a gambling establishment which was operated for many years by the current president of the United States, President Donald Trump. The Hard Rock Cafe will open its doors to visitors for the first time when it officially begins trading early in 2018. Hard Rock recently purchased the Atlantic City casino formerly owned by Trump, and is currently spending millions of dollars remodelling the gaming venue with its own unique, rock-centric brand. The new project will include the company opening its latest Hard Rock cafe inside the casino itself. However, this will mean that the brand’s current cafe on the famed Atlantic City Boardwalk will close, and will instead move to the old premises of the Taj Mahal.

The multi-national operator noted that the current cafe’s operations will end on September 30, with construction of the new cafe beginning shortly afterwards. The cafe will open at around the same time as the new Hard Rock casino, and is expected to create over 100 new jobs and be much larger than the current venue. Hard Rock purchased the Trump Taj Mahal from casino mogul Carl Icahn shortly after it closed its doors due to continued financial struggles. The casino was recently cleared of all of its physical assets in a liquidation auction, with bargain hunters securing valuable Taj Mahal relics at bargain prices while Hard Rock prepared to get to work revamping the joint as soon as possible.

The 1,250 room hotel and casino resort will likely undergo a host of changes and facility additions before it is reopened under the Hard Rock brand. These changes are rumoured to include poolside gaming facilities, a large water theme park, and two massive sports arenas. As mentioned above, when it was operating as the Trump Taj Mahal the casino experienced continual financial hardships that led to it eventually being closed altogether in 2016. However, Hard Rock’s expansion into the casino gambling market included its purchase of the once-popular Atlantic City casino, and the firm is confident that relocating its local cafe will attract plenty of players and tourists to their newest brick and mortar casino.