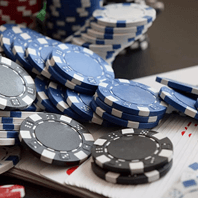 Few head-to-head matches in the Poker world have been as hotly anticipated as Hellmuth versus Negreanu. For weeks prior to the event, the pair took shots at one another on Twitter, creating a veritable pressure cooker of tension. Negreanu Tweeted that he had dived into his opponent’s tournament record, only to come away unimpressed. A statement that, in a stunning turn of events, would come back to haunt him.

Perhaps Negreanu’s research overlooked that Hellmuth had had plenty of experience in the chosen format of the event, having recently won multiple High Stake Duels against Antonio Esfandiari. Hellmuth walked away with $350,000 on that occasion, indicating that he was more than capable of holding his own.

The match got underway at PokerGO Studios, with each player given a 50,000-chip starting balance. The game was Sit and Go, with blinds set at 50/100. As the cards started flying, an early turn saw Hellmuth knocked down to the brink of bankruptcy. He landed up with just 5k chips versus 95k, seeming to indicate that things were going to draw to an early conclusion.

But against all expectations, and in perhaps one of the most dramatic comebacks in the history of the game, Hellmuth eventually won. It was no small task, however, and the event went on for a full 6 hours before the inevitable conclusion. He took home a not too shabby $50k in the process, which is certainly a good amount for a single day’s work.

But that isn’t the end of the story.

As the pair shook hands, Negreanu could audible be heard declaring that there will be a round 2. No doubt the Poker legend will be looking for a little payback, though his ego will be wearing the bruises of this outcome for some time. Especially given that, in order to even take part in the rematch, he will have to cough up a staggering $100k.

Meanwhile on Twitter Poker pros from around the world expressed their disbelief. Ryan Feldman declared the event as the most impressive in Hellmuth’s career, pointing out that the deficit had been sitting at 19:1 before the turnaround.

Danielle Moon expressed similar sentiments, saying that it had been an incredibly entertaining event, and she was eager for round 2.

Negreanu himself Tweeted, congratulating his opponent. But the brave words were surely draped over an ocean of tears.