How To Play Craps Online for Beginners 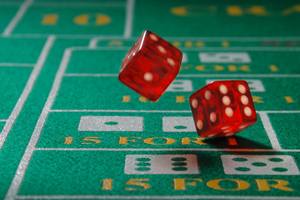 Craps is a game of dice in which players place bets with the winner determined by a roll of the dice. The game of craps only requires a pair of dice, a minimum of two to three gamers with money to wager and, although not required, a group of spectators to add interest to the outcome of the game.

The most common non-casino style of craps is termed Street Craps or Blanket Craps. Casino craps games are commonly referenced as Bank Craps because players are wagering against the House.

A descendant of the British game, Hazard, Street Craps has no banker or person responsible for handling the money, monitoring bets and ensuring correct payouts. During WW II, Street Craps became affectionately known as Blanket Craps as military personnel often used a blanket for a smooth playing surface.

Although deemed quasi-legal at a non-casino setting, in an in-home or private-setting venue craps shooting can be a fun and possibly lucrative form of gambling.

Gaming begins once the Shooter's bet is totally covered and all players have announced their pass, don't pass or refuse option.

If dice total result is any number other than the above, the pot is equally shared by all of the non-cover betters.