How to Play Poker 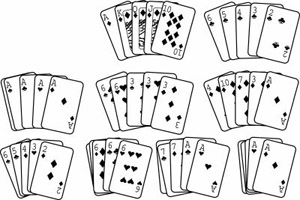 Learning poker does not necessitate a degree in rocket science, but requires an understanding of the basics of the game, a strong sense of self-discipline and a positive mental attitude. The basic hands are:

Straight Flush—5 cards of the same suit in numerical sequence. Should two occur in the same round, the qualifying hand= highest numerical value

One Pair—2 cards of same numerical rank + 3 cards any number or suit. At the end of the round, if no player holds any of the above combinations, the player with the highest card count value wins the game.

Step 2: Five cards are dealt one at a time, face down beginning with the player seated to the left of the dealer. The balance of the deck is placed face-down in the center of the table.

Step3: First player to the left of the dealer may opt to open the bidding with any amount below the betting limit. This player's other option is to call “check” at which point play proceeds to the next player.

Step 4: Following the initial opening bid, the next player must See---match the opening bid Raise—See (match bid) and Raise (add additional bid to the pot) Fold---place cards held face-down, forfeit any bets placed and cease playing in the round.

Step 5: At this point non-fold players may in turn discard a maximum of three cards face-down and receive three new cards dealt face down. Bidding resumes and play continues until all players elect to fold with the exception of one, who becomes the winner and collects the pot.