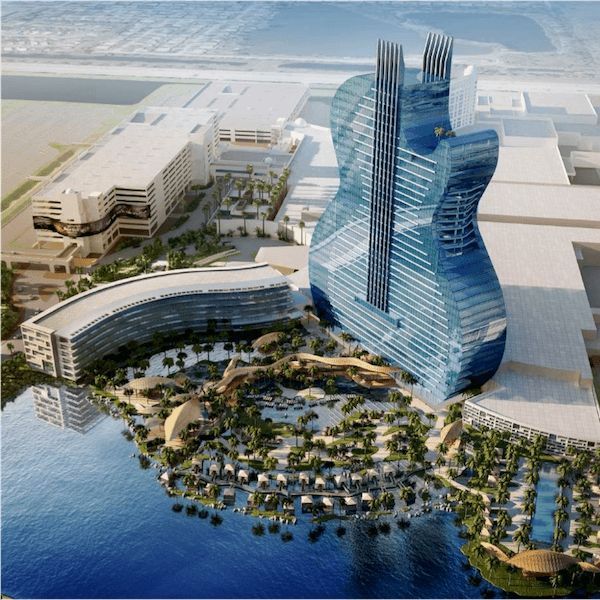 In some exciting casino news, the Seminole Hard Rock Hotel & Casino Hollywood in Florida, USA, recently revealed tentative plans for a US$1.5 billion upgrade, which will include a 450 foot guitar tower. According to Orlandoweekly.com, if the plan goes ahead, it will see the already massive venue double in size by 2019. Not to be confused with the Hard Rock Café in Hollywood, California, the Hard Rock Hotel & Casino Hollywood is located in Florida, sandwiched between Miami and Fort Lauderdale. The venue, under the ownership of the Native American Seminole Tribe, occupies a staggering 100 acres (40 ha) of land on the Hollywood Seminole Reservation. It is already a major landmark that has come to define the Hollywood skyline. The proposed upgrade (and the eye-catching new tower, in particular) will take the venue’s icon status to a whole new level.

As mentioned, the 100 acre property – including its 145 sq ft (13 500 m2) casino – is set to double in size within the next year or so if the proposed expansion goes ahead. This major pillar of the Hard Rock international network, which is also owned by the Seminole Tribe, will see the inclusion of an 18 000 square foot poker venue, 3 267 slots, and 178 table games. The already popular shopping and entertainment experience offered by the Seminole Hard Rock Hotel & Casino Hollywood will be further enhanced by the proposed upgrade. New features will include a wide array of retail outlets, several new restaurants, and the renovation and extension of Hard Rock Live, the venue’s entertainment arena, from 5 500 seats to 7 000 seats. The much-talked-about 450 foot guitar tower conceived as part of the US$1 billion upgrade to the Seminole Hard Rock Hotel & Casino Hollywood will be a major tourist attraction if it materialises. An artist’s rendering depicts a glittering façade of glass and steel in the shape of a guitar body, complete with a bridge and and five strings reaching up above the top floor. Plans for the new tower include 640 luxury hotel suites, a 41 000 square-foot spa, numerous restaurants, a business centre, and a 10 acre pool complex.

At present, the Hard Rock Hollywood, which was originally opened in 2004, features 145 000 square feet of gaming space with table games and slots, as well a live poker room. The 12-storey Mediterranean-style hotel tower features 481 guest rooms and 81 suites, with a lagoon-style pool area. Popular attractions include the Hard Rock Live entertainment arena, which hosts live shows and sporting events, the Improv Live comedy show, and the Hard Rock Café, to name but a few. If the guitar tower is erected, it will be big brother to the existing 50 ft signature Hard Rock guitar statue, modeled on the one played by the legendary Jimi Hendrix.