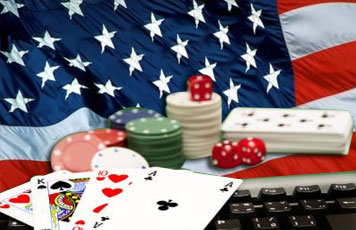 With states struggling to recoup lost revenue, many are turning to online gambling in an attempt to turn the tables in their favor. Last month, New Jersey followed in the footsteps of Delaware and Nevada to become the third US state to legalise internet gaming, and it’s looking like other states such as California, Pennsylvania and Illinois are thinking about introducing something similar.

Doug Walker, an economics professor at the College of Charleston who has studied the effects of legalized gambling speculated, “Generally, states that have already established casino industries will be more likely to begin offering online gambling sooner.”

The growing market for online gambling marks a radical change in the country’s overall attitude to internet activities which were once restricted. Accepting online gambling as an acceptable business brings with it a wealth of financial opportunities in an endlessly lucrative area of e-commerce that, until now, states could not benefit from.

Online gambling was generally viewed as a business peppered with criminal activity until the Obama administration eased federal restrictions in 2011.  The anonymity of the web brought issues of fairness and safety to the fore with players risking credit card fraud and identity theft by unwisely disclosing their personal information online.

Now considered a less lawless enterprise, the online gambling marketplace seems set to generate a much-needed economic boom. Gaming heavyweight Zynga saw its shares skyrocket this year after it extended its online gambling enterprise overseas. Shares of rival Glu Mobile shot up 18% after it announced that it would offer a real-money Slot game for mobiles.

New state laws allowing online gaming as long as it has an on-land affiliate have seen online gambling companies scrabbling for real estate in Delaware, Nevada and New Jersey - Gov. Chris Christie’s administration in New Jersey predicts that the law will boost casino tax revenue by up to $200 million in the next financial year.

We could see the two acting as substitutes or complements, and the relationship could be different in different gambling markets.” It looks like we’ll just have to wait and see whether the states’ gamble pays off.