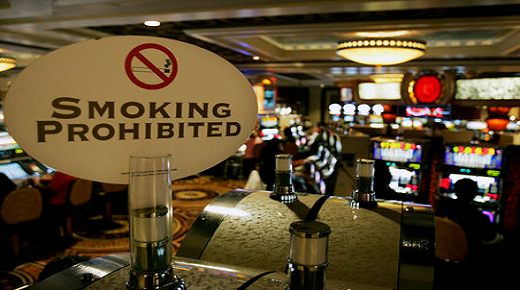 If smokers disappear from Kansas City casinos, the question is will revenues generated by casino operations automatically improve? According to reports, citizens and elected officials are backing a plan to make Kansas City casinos smoke-free.

Not only do anti-smoking and pro-health proponents urge non-smoking ordinance adoption by the city but the enactment of a statewide casino smoking ban. Participants in the campaign include Clear Air Metro KC, and local chapters of the American Cancer Society and the American Lung Association.

The executive director of American Gaming Association argues that this action could adversely effect the current economic situation stemming from lower casino revenues. Ironically, this movement comes just in time for the National Conference on Tobacco or Health meeting presently taking place in Kansas City.

It should be noted that the 7th Street Casino, operated by a Native American tribe, would be exempt from any proposed smoking ban. In Nevada, where smoking is permitted on casino floors, many health officials point to the fact that in large cities emissions generated by vehicle exhausts and outdoor grills qualify as sources of second-hand smoke.

Smoke-free Kansas City casino advocates cite the case of an Atlantic City casino employee who was awarded $4.5 million dollars in a suit involving second-hand smoke issues. On the other side of the coin, American Gaming officials maintain they can not show partiality to Kansas City while continuing to allow smoking at their other venues.

Smoking is permitted at the newly opened Kansas City Speedway casino operated by Penn National. Officials of Penn National question whether they would be continuing operation of this facility should a smoke-free ordinance be enacted. The anti-smoking movement maintains that 50 million non-smokers visit Kansas City casinos each year but has failed to reveal how this number figures into the equation based on the total number of casino patrons per year, or what proportion of the eight to ten percent drop in casino revenues and the 10 to 12 percent decline in patronage can be totally attributed to the allowance of smoking at casinos.

Another issue non-smoking proponents fail to address is the future of the Kansas City All-Star Scholars Fund which is totally financed by casino revenues. In addition to the awarding of $1,000 scholarships to 368 secondary graduates; 6,000 current students will each receive $100 in prepaid school supply vouchers in addition to $500 cards awarded to teachers who request them.