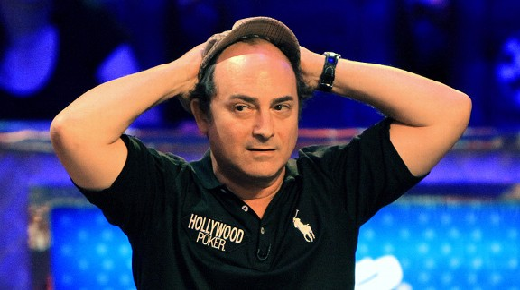 Kevin Pollak came to Las Vegas to promote a website called HollywoodPoker.com and he ended up playing in the World Series of Poker the week of July 7th, 2012. He played better than expected during the week.

HollywoodPoker.com is a website that interested poker players use to interact socially with celebrities while sharpening their poker skills and it's free to play. Pollack, 54, commented recently that it was a pressure filled day of high intensity poker.

He also said that it compared to acting across from actor Robert De Niro as far as the pressure went. He hasn't considered himself to be a tournament poker player but he can hold his own as he proved on Saturday. Kevin Pollack is known for his parts in such movies as "A Few Good Men", "Casino", and "The Usual Suspects". Another actor, Ray Romano, was eliminated earlier in the tournament.

Kevin Pollack, however, went through the entire day on Saturday in the No Limit Hold-em tournament that featured a $10,000 buy in. The website Kevin Pollak originally came to the Rio Hotel in Las Vegas to show support for, HollywoodPoker.com, was at one time a pay to play website.

It became a free to play gaming website when the government cracked down on Internet Poker websites in April of 2011. The website has been re-designed and is starting up again in July 2012 as a social and purely for entertainment gaming website.

People love having a rare chance to interact with celebrities and celebrities are able to promote their favourite charity so it is a win for all involved. The idea is to enjoy the game of poker without the gambling aspect of it by playing poker for fun and for the chance to compete against a celebrity. Other celebrities that have recently promoted the HollywoodPoker.com website include NFL Network host Rich Eisen and actor Rob Reiner.

Using celebrities to promote this website has been compared to the way that Twitter used celebrities and has since become very successful. Kevin Pollak first became involved in the poker community when he hosted a show called "Celebrity Poker Showdown" for the Bravo Television network. He has played poker since he was ten years old, but became a more prolific player while participating in tournaments for charity and in cash games.