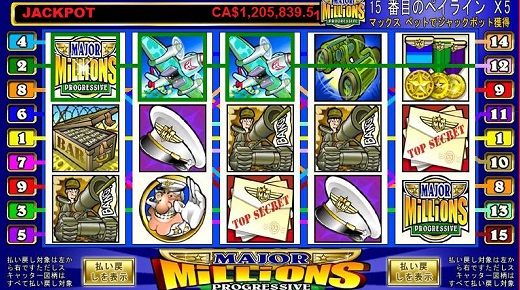 This week a lucky mobile player at All Slots Mobile Casino won a staggering CA$1,025,839.51 playing on the popular Major Millions mobile Slot. Major Millions is a Progressive Slot that is well known for delivering big rewards, but this is the largest ever Jackpot to be won by a mobile player at All Slots mobile Casino. The player, known as Cihan D., was enjoying his favourite 5 Reel Slot Major Millions when, out of the blue, he hit the enormous Jackpot. Of course, he was blown away and couldn’t even believe for he was seeing. The Major Millions Jackpot starts out at a minimum amount of CA$250,000 and can grow substantially the more that it’s played, making it one of All Slot mobile Casino’s most lucrative Slots. Mega Millions mobile Slot comes in three varieties: 3 Reel, a Mega Spin version and Cihan D.’s game of choice, the enhanced 5 Reel Slot. All three versions operate on the same Jackpot so it’s just the style of gaming that varies between them. The more people play on any of these Slots, the bigger the prize pot grows until someone lands the Jackpot. Although players on mobile are just as likely to win as those using desktop computers, the biggest All Slots Jackpots tend to be won online due to the fact that there aren’t quite as many mobile players.

How to Spend CA$1 Million

Lucky Cihan D. is already thinking about how to spend his massive prize. He’s thinking it might be time to take early retirement and possibly even take a trip to Vegas to enjoy some of the world’s most famous land based Casinos. David Brickman, VP of Player Affairs at All Slots Mobile Casino, was thrilled when the news broke of Cihan’s massive win. “We are so excited for Cihan and his amazing win. Major Millions is one of our most established and popular Progressive Slot games,” he said. “Its availability on both PC and mobile devices makes it even easier to hit the big one.”

If you’d like to try out All Slots Mobile Casino for yourself then download it here today and claim an exclusive Welcome Bonus worth up to CA$500 FREE.