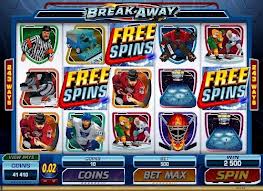 Ice Hockey-themed Slot Break Away just got even better! Popular casino Crazy Vegas has gone above and beyond to make sure its players get a gaming experience like no other this month, by introducing a Multiplayer Tournament feature to Break Away, one of its most popular Slots. This means players can pit themselves against the competition and compete for the grand prize, making for exhilarating gaming that simply can’t be had elsewhere.

Crazy Vegas Casino is a top-notch place to play; with more than 600 supreme casino games, a Welcome Bonus for new players that awards them 3,000 FREE to spend in their first 60 minutes of gaming, or as much as CA$500 in Deposit Bonuses, and a Loyalty Program through which players are rewarded just for doing what they love – playing – Crazy Vegas is hard to rival. With all the thrills of Las Vegas right at your fingertips, see how your Slot spinning skills fare against other gaming enthusiasts.

Break Away is a great choice; bought to you by the leading software provider in the industry, Microgaming, its top-quality graphics and sound effects bring ice hockey to life on your screen, whisking you away on a thrilling escapade in which big earnings are just part of the fun! It’s no wonder Microgaming chose this sensational Slot to turn into a multiplayer platform: Break Away is one of its most riveting releases to date. If you were to enter into a Break Away Tournament, you’d be presented with a 5 Reel Slot with 243 Ways to Win, just like the original non-tournament version of the game.

Its features include Smashing Wilds, Rolling Reels and Free Spins. All you have to do is spin the Reels within the tournament time frame and accumulate Points to push you to the top the leader board, where the highest ranking players will receive a massive cash prize. The Break Away Tournament can be found on Crazy Vegas’ entire range of multiplayer Slot Tournaments, including Reloader, Extender, Survivor, Midweek Moolah, Weekend Whopper, Monthly Monster, The Accumulator, One Shot and Freeroll.