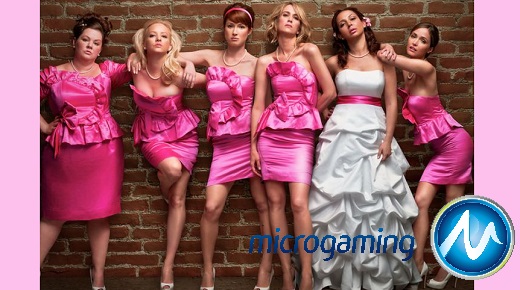 Microgaming have announced the release of a new slot based on the hit comedy Bridesmaids and we couldn’t be more excited. We know that for movie-themed games Microgaming is the boss and the top games development company has struck again with what is set to be the slot sensation of the summer. The 2011 comedy Bridesmaids, released by Universal Pictures, starred Kristen Wiig and Melissa McCartney in film so funny it rivalled the some of the classic frat pack smash hits.

Some critics couldn’t believe quite how funny a cast starring predominantly women could actually be. Well, clearly those guys were idiots! We can’t think of any game we’d rather play right now than a brand new Bridesmaids slot – if only we didn’t have to wait until summer 2015. We don’t know very much yet about this thrilling new slot but it’s certain to feature Microgaming’s innovative graphics and winning multi-level technology.

The press release from Microgaming has also led us to believe that the game will be in the popular 5 Reel format, although how many paylines will appear on the screen is yet to be announced. Roger Raatgaver, CEO of Microgaming, commented “Bridesmaids is a comedy classic. The storyline, characters and genuinely hilarious stand-out scenes combine to make it one of the most successful comedy films of all time. “We’re thrilled to have signed another licensing agreement with Universal.

Furthermore, the bran adds a completely new dimension to our branded game portfolio – we’re excited for its launch later in the year.” The most recent slot to be released under the Microgaming-Universal umbrella was Jurassic Park. The Jurassic Park slot was a roaring success so we have very high hopes for the new Bridesmaids release.

Microgaming is one of the world’s foremost games developers, creating unique, innovative games enjoyed by players globally. To discover more top Microgaming slots head to All Slots Casino today and pick up a welcome Bonus worth up to CA$500 now.