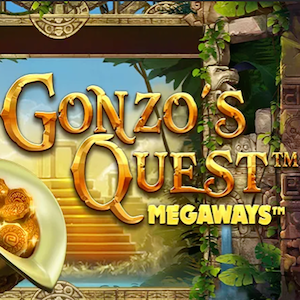 When leading online slots developer NetEnt first released Gonzo’s Quest back in 2013, no-one actually expected a sequel or even anything remotely like it to be released ever again. After 7 years still hailed one of the best slots ever to have been created, it was hard to even imagine a one-up being pulled on the already perfectly polished masterpiece. Until Red Tiger Gaming arrived on the NetEnt scene, that is. Now, Gonzo’s Quest MegaWays has been released, and reel spinning just got a whole lot better!

Fans of the original release will be happy to know that Red Tiger hasn’t tampered with any of the bits that made Gonzo’s Quest such a smash hit. Instead, the famous slot has been super-enhanced with Big Time Gaming’s proprietary MegaWays engine and gamification feature – creating even more and better ways in which to enjoy the game.

The original theme kept perfectly intact, players get to once again join Spanish explorer and conquistador Gonzalo Pizarro y Alonso as he sets out to find the lost kingdom of El Dorado. Here, the most courageous of travellers get to potentially bring home gold to the value of up to 20,000x the original bet.

More all-new features to have been included in Gonzo’s Quest MegaWays are Red Tiger’s highly popular Smart Spins, as well as their Daily Jackpots-tool. Also, the upgraded version of the slot comes standard with 6 reels and anywhere between 2 and 7 symbols appearing on each reel.

In Time For The Summer

Red Tiger Gaming Director of Business Development, Carl Ejlertsson, describes Gonzo’s Quest MegaWays as a slot that has without fail proved itself to be one of the best and most popular games ever to have been released. For this reason, said Ejlertsson by way of an official Red Tiger press release, it’s been an absolute delight to create a remake that is even more significantly boosted by the award-winning gamification tool created by Big Time.

Ejlertsson also spoke of how the team at Red Tiger Gaming had worked non-stop to ensure an on-time release of the most-anticipated slot to be released this summer. Gonzo’s Quest MegaWays is a collected effort between original developer and parent company NetEnt and newly acquired development giant Red Tiger Gaming.

2020 is off to a great start for Red Tiger Gaming – in more ways than one. The developer recently received 5 excellent rewards at an exclusive virtual 2020 EGR B2B Awards ceremony.

Red Tiger Gaming beat an entire field of industry rivals as it left the ceremony with the following stunning awards in tow: Mobile Supplier, Mobile Gaming Software Supplier, Slot Supplier, Innovation in Slot Provision, and Innovation in Mobile Provision. This only serves to once again drive home the fact Red Tiger Gaming is one of the most important and celebrated developers in the iGaming sector today.

NetEnt at the time explained their motivation behind the stellar acquisition as that of acquiring Red Tiger Gaming Limited being an acquisition right in line with its own vision for the future of iGaming and slots games development.

What the acquisition primarily did was to combine two of the industry’s most innovative organisations into a single iGaming development giant. NetEnt AB owns 100 per cent of the shares in Red Tiger Gaming Limited. The cash purchase price was financed via debt facilities provided to NetEnt by Danske Bank and Nordea.

Now, with the release of Gonzo’s Quest MegaWays it certainly looks like the acquisition was a success in more ways than one.