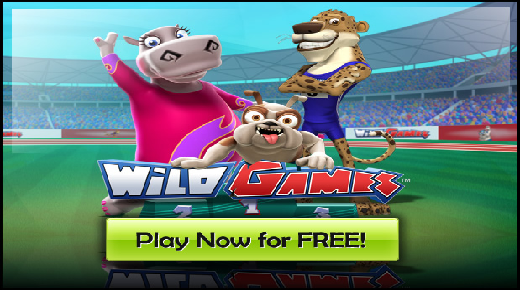 A new online slot game has just debuted featuring a fun and exciting Olympic Games theme. The London Olympic Games will be held this year from July 27, 2012 through August 12, 2012, and the timing of this release is meant to coincide with those games. The title of the new online slot game is Wild Games. The Olympians featured in the game are, appropriately, an array of wild animals. There is a cheetah featured that runs a 100 meter dash.

This wild animal choice makes sense since Cheetah's have long been considered to be the worlds fastest land animals. It is said that they can accelerate to freeway speeds in just a short distance, and are great at sprinting. In contrast, a bulldog is featured in the free style swimming event. There has been a popular belief that most bulldogs cannot swim, which makes the bulldog an amusingly ironic choice.

Hippo's are featured in the balance beam event, which is another creative choice. For sheer entertainment value, the animals chosen offer colorful amusement along with exciting and enjoyable game features. The clip at the beginning of the game says that the fittest and wildest and toughest are gathered to compete in these games and shows these animals competing.

The Wild Games slot machine is now online at Casino Tropez and other Playtech online casinos. The trophy is the wild symbol for this game and offers the largest line payout. Other symbols are the hippo, bulldog and cheetah. Bronze, gold and silver awards trigger a Medal bonus when three of the same award show up on the reels. Bonuses are also triggered when three of the same animal symbols show up. A freestyle swim bonus occurs when three bulldogs emerge, a Balance Beam Bonus is triggered when three hippos show up, and a 100M Dash Bonus occurs when three cheetahs appear.

When the Balance Beam Bonus appears, players can choose from among three balance beam routines, giving players a more interactive and exciting game experience. The three types of medals shown trigger extra wild features and expanding wilds, making this a fun and exciting game for slot enthusiasts. Free spins are also awarded when medals appear and the number of free spins varies according to the type of medal that emerges. This is one wild game with some very entertaining and exciting features.