Out with the Old slots? What happens then? 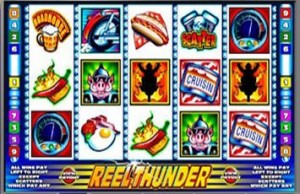 With the release of new casino games on a regular basis, it’s the sad truth that many older games eventually fall to the wayside and become pretty much redundant. Of course new games with innovative themes and brand new features are great and highly appealing, but are they causing us to overlook classic titles which truly stand the test of time when given the chance? A recent big win on a relatively outdated Slot occurred on the 30th of January and put old school Slots back on the map. One lucky player landed C$33,895 on Reel Thunder Slot while playing at Mummys Gold casino, showing the masses that older games still have the potential to dish out very real winnings.

The knock-on effect of a win this big was that more Mummys Gold players flocked to the game to see if they could share similar good fortune on the title. A mini ‘hot streak’ was indeed born, as the following month, on the 14th of February, another Mummys Gold player got an unexpected Valentine’s treat sure to send their heart a flutter - a €15,828 payout on the very same game. Reel Thunder’s appeal may be considered to be limited nowadays, as the game has no Bonus features to contend with the latest feature-laden Video Slots. There are no Free Spins to be claimed and no Bonus Games, so it’s understandable that many Slot players will have overlooked the title in favour of more recent releases. Reel Thunder is a simple 5 Reel, 9 Payline Slot with a fixed 1 coin bet per Payline. The game does however have special symbols and plenty of potential for lucrative combinations. The Wild Heart symbol will substitute for all others (with the exception of the Scatter) to create winning combinations. 3 or more of the engine Scatter symbols anywhere across the Reels will multiply your stake by as much as 50x and the Road Hog symbol will steer you to riches as there’s a jackpot payout of 10,000 credits for 5 in an active Payline.

The game has a number of high paying symbols, such as the spinning wheel, the road ablaze, the ‘cruisin’ logo and the speedometer, each of which pays out when any two appear aligned from left to right on an active Payline. This is how the Mummys Gold winners were able to accrue such massive payouts. The moral of this story is less recent Slot releases shouldn't be disregarded. Games with the power to pay out sums as impressive as Reel Thunder should never be considered old news! Next time you embark on a Slot play session, why not take a look at a few lesser-known titles because they could turn out to be cash-laden classics!