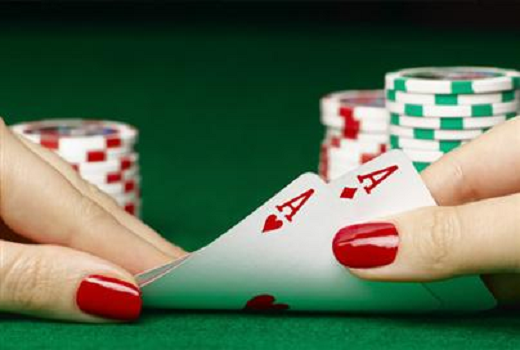 Born in Nashville, Tennessee, on October 1, 1967, poker's first female millionaire Kathy Lambert began her adult life as a Business Analyst. Following graduation from Marist College in Poughkeepse, New York with a bachelor's degree in business and finance, Kathy began her financial career at Dun & Bradstreet. Aside from being able to use her salary to develop a lucrative investment portfolio, Lambert quickly realized that the corporate world could never fulfill the lifestyle of her dreams. Lambert's basic knowledge of poker evolved from her age 12 involvement in watching her parents and their friends playing in-home nickel and dime ante poker. Her first venture into the adult poker world occurred when she entered a casino $5-Limit poker game.

This event ultimately catapulted Kathy into a job as a prop player whose responsibility was to open games and maintain player interest. Since this position required Lambert to use her own money rather than casino shill money, she viewed the experience as a valuable starting point for honing her skills and learning more about the game. Lambert's first break into the world of professional poker occurred at the 2002 Party Poker Millions online event in which she won $1 million and became the first female player to accomplish this feat. Now known as the World Poker Tournament, Kathy's poker millions competition included male poker giants such as Phil Helmuth and Chris “Jesus” Ferguson. Kathy's highest finishing female, third-place, ranking at the 2005 World Poker Tour was not broken until she was dethroned in 2007 by J.J. Liu. Lambert's outstanding record at the 2007 Shooting Stars Tournament lasted until she was bested by Van Nguyan in 2008.

During an interview, Lambert jokingly said that poker is a game of intelligence not physical strength. She also said that a woman's ability to multitask, and manage life while exercising patience coupled with mental and physical discipline could give men a run for the money relative to poker success. Lambert's 2004 World Series of Poker gold bracelet occurred during a $1,500 shootout which resulted in $110,180 in cash winnings. During a televised Poker Royale: Battle of the Sexes, in the final round Karate Blue Belt holder Kathy Lambert beat Antonio Esfandiari who had spoiled her chances of winning first place in the fourth preliminary round. In addition to her 2004 World Series of Poker gold bracelet, Kathy Lambert's accomplishments include: being the first female to win a minimum $5,000 buy-in poker tournament and being ranked number three on the female all time money list.

Lambert's name has been added to the Cardplayer Magazine 20 Top Players List. Lambert's list of future aspirations include winning a World Series of Poker main event and becoming the first female to secure a World Series of Poker title. In the furtherance of her professional poker player career, Lambert recently joined Poker Stars. She is hoping that a 2nd World Series of Poker bracelet will result from the $10K Pot-Limit Hold'em competition where she is the only female at the final table.