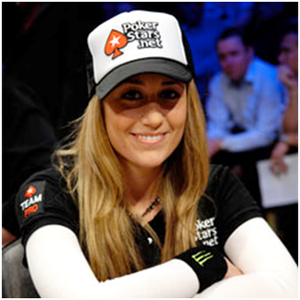 Known in poker circles by the pseudonym Lady Maverick, Vanessa Rousso was born on February 5, 1983 in White Plains, New York. Rousso is truly an embodiment of the dictionary's definition of maverick as a creature not marked with an owner's brand. According to Rousso, she was christened with this name by a relative from whom she solicited money to assist her in entering a $25,000 buy-in event. Currently a Florida University of Miami law student, Rousso entered the realm of professional poker in 2005 at age 22. By age 27, Rousso was ranked as one of the top five female poker players in poker history.

Rousso's French-American citizenship stems from her residence with her father, Marc Rousso, in Paris from the age of three until she returned to Florida in 1992 to live with her mother. Vanessa participated on various high school sports and debate teams while maintaining a 4.0 GPA. In her pre-law classes at Duke University, Rousso was exposed to game theory, the study of decision making, which was incorporated into Duke's psychology, economics and computer science curriculum. At first, Rousso experimented with Rubricks cube and chess, but quickly gravitated to poker which she learned to play at age five. Rousso completed the equivalent of a 4-year college degree in 2.5 years which established a record for early-degree completion at Duke.

Rousso admits to beginning by playing poker online because she was underage; however, by age 21 she was playing at Florida reservations and anywhere else within her time constraints and a reasonable commuting distance. 2005 was a banner year for Vanessa Rousso whose signature poker playing attire includes sunglasses, a pokerstakes.net cap and earphones. Her first professional winnings stemmed from her pro-poker debut at a No-Limit Hold'em Summer Series event in Vegas. In the same year, at an Atlantic City casino, Rousso parlayed a $1,500 buy-in into $17,500 in winnings which she used for entry fees for World Poker Tour events. Rousso's fifth table placement at a World Series of Poker No-Limit circuit event culminated with being named the youngest female player to attain this level of World Series of Poker expertise. Following her professional poker tour debut in 2006, Vanessa admits to spending two days a week in law classes with the balance of each week's time being occupied with poker tournament play and decision making relative to online poker club endorsement requests.

With the best interests of both female and male poker players in mind, Rousso joined with Poker Players Alliance lobbyists and others having an interest in the poker industry to storm Capital Hill in a campaign to garner support for the repeal of the 2006 Unlawful Gambling Enforcement Act. At the 2009 National Heads-Up Poker Championship event, Rousso bested 64 gamers including Phil Ivey and Doyle Brunson. With current earnings estimated to be in the neighborhood of $2,900,000, Rousso occupies her time as a poker instructor at her Florida Big Slick Boot Camp to which poker students pay a $399 entrance fee.