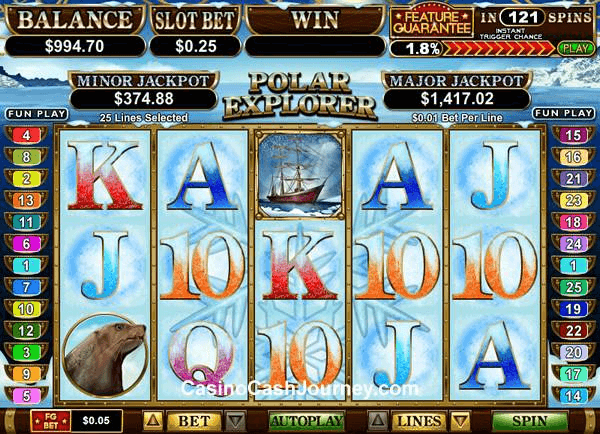 This summer may be a hot one, but a nice cool refreshing Polar Explorer Slots game was recently introduced by Intertops Online Casino that will help anyone to cool off and have fun in the process. Embark on an adventure to the North Pole by enjoying playing Polar Explorer slots. The entire game is populated by beautiful Arctic animals and in this frozen wonderland, ice crystals sparkle as players rack up points.

This new game is a fun-filled 5-reel slot game with a 25 pay-line. The game has wonderfully imaginative graphics and is exciting and challenging for all skill levels. There are three bonus games, and one of them can be triggered by the symbols that feature pretty etched snowflake patterns. There is an exciting Hidden Treasure bonus game situated inside of a beautiful ice cave and it is filled with extra free game wild features as well.

The game is like Aztec Treasure in that it has a Feature Guarantee system in place which allows bonus spins to be triggered whether or not the symbol for a trigger is spun. This allows for extra surprises and excitement featured in an already cool game. Intertops Casino is getting into the spirit of the London Olympics, set to take place July 27 through August 12, by offering a special $100,000 bonus giveaway to salute the Olympic champions.

This is a special bonus program just for the summer and is one of the biggest ever offered by Intertops Casino. There are bonuses given twice a week for $250 and on September 3rd, the winners of the biggest prizes will be announced. The game is available both to frequent players and those that play occasionally as well. Intertops, the casino this game is featured in has been in business since 1983. While their main sports betting business remained in Austria in 1997, the online business was moved to Antigua. They were the first to develop an application for mobile phones for mobile betting in 2001.

In 2003, they began online poker operations and now they have some of the biggest progressive jackpot's of any online casino. They feature more than 300 casino games from some of the premier game providers including Real Time Gaming. There are several jackpot's online that are now over $1,000,000, making playing at Intertops Casino exciting.