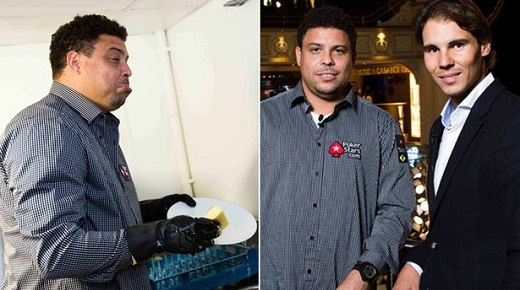 We all know that a lot of sports professionals and Hollywood types love to dabble in some high stakes Poker – some of them are even impressively good at it – and this week it was Rafael Nadal and legendary Brazil footballer Ronaldo who went head to head once again at the Poker table. The charity Poker game took place at London’s Hippodrome Casino on Tuesday this week and gave Ronaldo the opportunity to seek revenge after the tennis legend took him to the cleaners at Poker last December. Unfortunately for the former footballer lady luck was not on his side in this week’s face off.

The 12-time Grand Slam champion claimed the CA$50,000 prize money after just a 20 minutes session and will donate the cash to his Foundation for children and teenagers at risk of social exclusion. Nadal commented on his win, “It was close for most of the match and I’m delighted to have won. I called all-in at the final hand, which proved to be a good move! Ronaldo is a football great and it’s amazing for me to have the opportunity to face him at the Poker table. I’m happy for a rematch if Nadal is up for the challenge.” The tennis pro also commented on the similarities between Tennis and Poker, revealing, “In Poker you need self-control and the ability to analyse your opponent and read the game to know when to go for it, a strategy that is not too dissimilar to tennis.” Ronaldo was a good sport about losing to Nadal for a second time, confessing that his mistake was going all-in on a bluff at the end. “Sometimes you have to be bold in Poker and even though it didn’t work out this time, I had fun!” he said. Unfortunately for Ronaldo he was left with 400 plates to wash up as punishment!