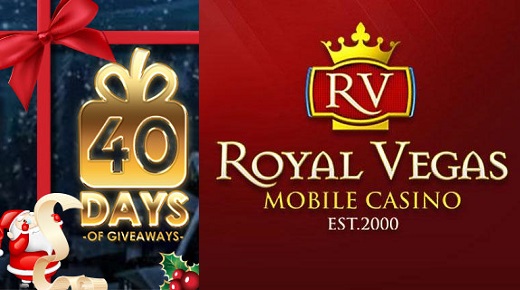 Royal Vegas Casino has a sensational Christmas promotion open now to all its players, simply sign up and you could win a chunk of the CA$140,000 prize fund. Head over to Royal Vegas Casino today to start playing the Progressive Jackpot and you could be the lucky player to win the prize when it pays out – now over CA$5 million! The massive prize pot has grown so big on account of the Royal Vegas Santa Gift Grab which has seen loads of new players taking to the awesome online Casino and boosting the rewards. To mark the holiday season Royal Vegas Casino is hosting an event for an amazing 40 days during which players can be in with a chance of winning a share of the CA$140,000 prize pool. Players will be allowed to pick up one Christmas gift from Royal Vegas for free every single day during the promotion, including free spins, reward points, credits, multipliers, cash back and even more! Plus, you might be lucky enough to win the Progressive Jackpot while you’re at it! The Royal Vegas Progressive Jackpot is likely to reach the CA$6 million mark soon and the bigger it grows, the sooner it will surely pay out! The great thing about Progressive Jackpots is that they can be won by anybody – whether you’ve played 5 spins or 500 – so you could become a millionaire in minutes!

As an extra special Christmas gift, all new players at Royal Vegas Casino

this month will receive a Welcome Bonus worth up to CA$1,200 – claim yours now