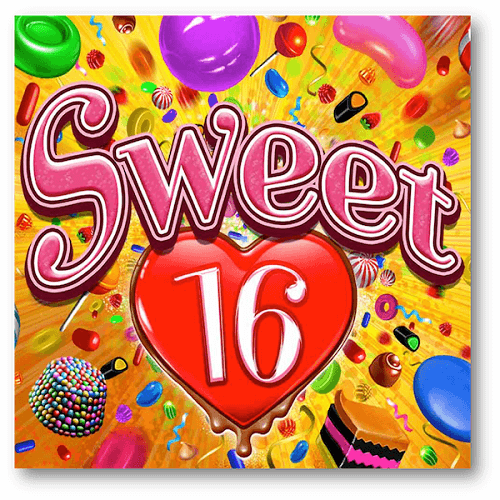 At the start of 2016 RealTime Gaming (RTG) promised fans they’d release new games throughout the year, and that every month there’d be something new to play. The developer stuck to their promise, and in addition to releasing an abundance of new games, they also ensured that their quality never once faltered. Over the course of the year games like Zanshi and Eternal Love were released and have gone on to become the most popular slots in RTG’s already-impressive history. To wrap up 2016, RTG announced that not only would it release one more slot, it would also include a brand new feature, never seen before in any of the developers games. Sweet 16 was released in mid-December and boasted the Morphing Symbols feature, making it an almost instant hit.

As the name suggests, Sweet 16 is a candy-themed game that also gives a nod to the MTV Reality Show of the same name. The game also draws inspiration from popular mobile games such as Candy Crush, and is filled with sweet treats that will make player’s mouth’s water. The new Morphing Symbols feature is the games main attraction, and RTG have pulled out all the stops to create a new bonus element that’s both rewarding and loads of fun. With Morphing Symbols, any symbols in a winning combination can morph into new symbols and create yet another winning combination, without another spin. With every successive win created by a Morphing Symbol a player’s prize is multiplied by up to 10x. The symbols keep morphing until no winning combination is attained, and the bonus feature then comes to an end. As an added perk, when the Free Spins bonus is awarded, the Morphing Symbols come with an increased multiplier of up to 20x. This innovative feature is sure to crop up in more RTG slots releases, as its already proving to be a huge hit.

Sweet 16 doesn’t only offer players the chance to boost their wins with the Morphing Symbols, Free Spins and a Wild symbol; it also features 243 Ways to Win, increasing players’ chances of striking it lucky on every spin. The Winning Ways format has become incredibly popular with slots developers, and Sweet 16 uses it to its full advantage. Sweet 16 is available for play on desktop and mobile and for free and real money. The game might be a little too showy for some players, but it’s also ideal for those with little to no experience, as its interface is brilliantly laid out, making it easy to play. Due to the success of Sweet 16, RTG may choose to use the same format and bonus features in a game with a slightly more muted theme in the future.