Home   >   Casino News   >   Seasteading Nations That Float In The Ocean

Seasteading: Nations that Float in the Ocean 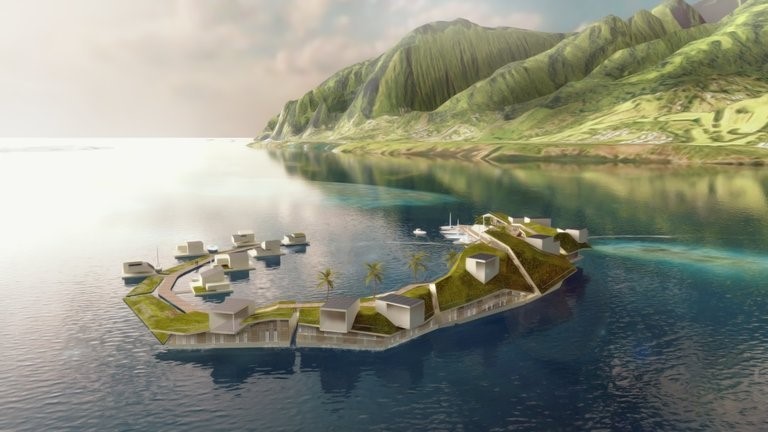 Some futurists and science fiction writers accurately imagined the challenges that come with modern life and society, but most people couldn’t imagine them. Now they’re here, and include overpopulation, and difficulty in getting and managing enough resources. A more longstanding problem is how humanity chooses to govern itself. Different ideologies have caused major conflict all through human history, with most groups believing that they are the ones in the right. With a reputation for out-of-the-box thinking, it’s not really surprising that the meritocracy of Silicon Valley has become an incubator for various ways of dealing with both of these issues. Among the most interesting is Seasteading.

Homesteads on the Sea

Sailor Ken Neumeyer coined the phrase “Seasteading” in 1981. He wrote a book called Sailing the Farm, in which a ship featured as a floating metropolis. Now, the word has come to mean any kind of floating homestead, and in the early 2000’s Patri Friedman, the grandson of famed American economist Milton Friedman, became very taken with the concept. The younger Friedman quit his job at Google and, together with PayPal founder Peter Thiel, founded the Seasteading Institute. Thiel believed in the concept of humans living on sea-based colonies so strongly that he paid more than $1 million of his own funds in seed money. In 2011 Joe Quirk joined the team; he is now President of the Seasteading Institute. He was inspired by the Burning Man festival, and wanted to find a way to recreate the ideals he saw there.

Quirk’s vision is startup countries; independent cities that support diverse societies, so that different kinds of people can all find a place where they feel at home and there is no central government control. Seasteading seems like the best solution to global warming and climate change, and is an interesting concept in terms of politics, human nature and even philosophy. Thiel himself has withdrawn from the project, saying the engineering required is still several years away, but serious plans have been drawn up and a pilot project is now underway in French Polynesia. The French Republic collectivity willingly agreed to the trial; rising sea levels are a major concern to them and Seasteading could be a good solution.

The Seasteading Institute and a newly created company called Blue Frontiers have undertaken the Floating Island Project, which has a projected completion date of 2020 and will create a structure to house up to 300 people in a lagoon near Tahiti.

Beyond the physical logistics of creating a startup city that can sustain itself and withstand salty ocean currents, creating the floating Utopias that Quirk wants to see could be difficult in a number of ways. A vast collection of tiny self-governing Seasteads could have serious conflict with one another over differing ideologies; that’s what humans have always done on land, so why would it be different on water? In addition, if there is no central authority, how will the homesteads be run and managed? What happens if someone commits a crime? What happens if the perpetrators skip the island they’re on and hide out on another one? What about environmental laws, or gambling legislation? Will you still be able to play at your favourite online casinos, no matter which island you’re on? And, very importantly, what currency will be used? Will each Seastead have its own? That seems too complicated, but would it work to have supposedly sovereign nations all using the same currency?

What would the tender in these brave new worlds be? Their decentralised ideal suggests that they are the perfect setting for cryptocurrencies, especially since they would have no older financial establishments or traditions to deal with. The financial space would essentially be a blank canvas, and altcoins might be able to enter it easily. Since we’re starting to see that some kind of regulation is necessary to keep virtual currency ticking over in our current society, it would be interesting to see how it was ultimately organised on a Seastead – or if it caused the island to fall into anarchy. There is definitely a sense of the unknown with Seasteads, and watching the Floating Island Project will surely be very interesting to anthropologists. Can humanity succeed in creating a mutually tolerant world, with diverse floating republics that have separate laws, currencies and ideologies?

This remains to be seen, but Quirk and Friedman definitely seem to think so.