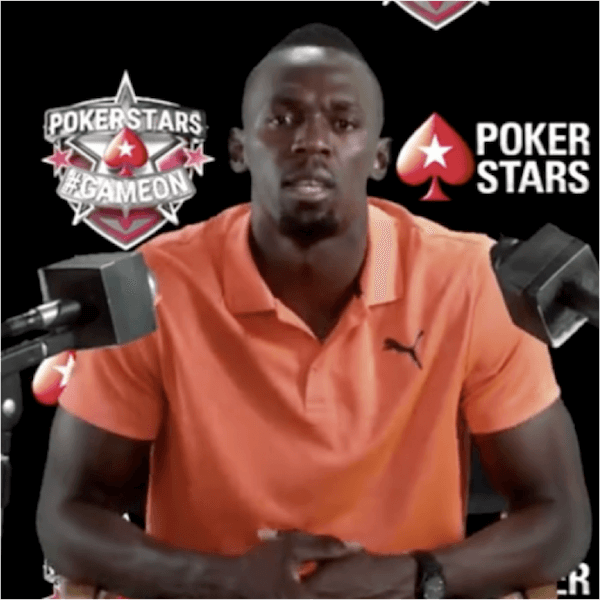 There’s something unbeatable about seeing your favourite sports stars as ambassadors for the sports betting markets or casino games that you are equally passionate about. Betting and casino brands have quickly realised that the way to their players’ hearts is to promote their offerings alongside some of sport’s biggest stars, and this has led to some fantastic partnerships between betting companies and sporting legends. The latest example of this features no other than the world’s fastest man. Usain Bolt recently retired from his incredible athletics career, but has since kept up his lightning pace by signing on with PokerStars to promote its fastest online poker game yet.

The special edition of Zoom poker at PokerStars offers branded Usain Bolt tables, and all of its marketing is endowed with the worldwide celebrity, who happens to be a huge poker fan himself. Zoom poker is a fast-paced real money poker game with a tournament format, in which players’ opponents change with every hand for less waiting and more thrill. Zoom boasts special promotions, puzzles, missions, challenges and free rolls for its players, creating a game that is just as exciting as Usain Bolt’s own career in running.

World’s Fastest Man To Focus On Poker After Retiring

The charismatic runner who is known around the world for being the fastest man on earth ended his years-long career with an emotional speech at the World Athletics Championships in London. Bolt, who has inspired millions of people with his go-getter attitude and lightning fast skills has now chosen to focus his efforts on his passion for poker; a pastime that fellow poker players will no doubt respect after seeing the athlete’s face endorsing their favourite online poker brand. PokerStars is famous for holding major tournaments both online and in the real world, and with Bolt behind the brand, they can only gain greater recognition. Commenting on his deal with PokerStars, Bolt noted that he is very excited to bring his special edition Zoom game to fans and players around the world. He also said that Zoom is a non-stop online poker game full of fun and competition, which he hopes everyone will enjoy.

David Carrion, Director of Marketing at PokerStars, has also commented on the exciting new advertising deal, noting that Zoom is the world’s fastest poker game and one of the most popular, offering a fast and intense poker experience to all who play it. Bolt is the ‘ideal fit’ to market Zoom, Carrion said, also noting that having the world’s fastest runner on board at PokerStars will surely attract plenty of new players to the game. Bolt has also hit back at Kevin Hart in his new video for PokerStars’ social media battle, #GameOn, showing off his brand new special edition poker game. The light-hearted battle between the runner and the Hollywood comedian has been playing out through public videos, while using social media likes and comments as their scorecards. To keep up with #GameOn, check out PokerStars’ and Hart’s social media channels to see how the comedian responds.

Usain isn’t the only big sports star to get an exclusive deal with PokerStars, either. The brand is well known for using sporting legends in its advertising campaigns, having signed a string of advertising deals with sport’s biggest names over the years. One of the brand’s most notable deals was struck back in 2012, when PokerStars signed tennis star Rafael Nadal in an agreement that would last three years. According to PokerStars, Nadal played a crucial role in popularising their brand and creating memorable ads, and representing it during tournaments, promotions and charity events. Nadal’s fame in Spain definitely also contributed to the brand’s growth there, as it signed the tennis star just weeks after online poker was legalised in the country. Next up was a partnership with Neymar da Silva Santos Junior (Neymar Jr), one of the world’s most prized football players.

The well-known player has an equally well-known love for poker, and has been a part of the PokerStars team since March 2015. He has worked hard to popularise poker through attending various events and working with Helping Hands. PokerStars has also managed to sign yet another international football star; Cristiano Ronaldo. The iconic player has participated in worldwide marketing campaigns for the brand. Cristiano Ronaldo is also passionate about playing poker. Ronaldo’s love of sport and the huge number of football awards he has won has made him an unforgettable star - and the perfect ambassador for the world’s largest online poker brand!

The link between sporting greats and advertising is powerful, and just about every brand can benefit from having a famous face behind them. Something PokerStars has proven time and again.