Yet another Sweet Slot Tournament from Microgaming 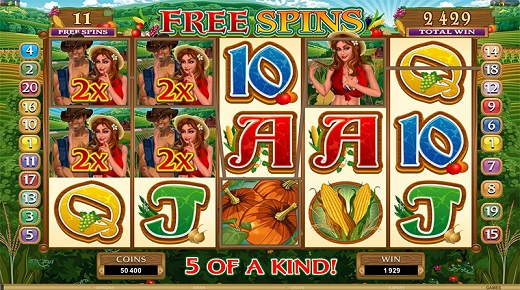 Popular online Casino software developer Microgaming has launched yet another hit with its new Sweet Harvest multiplayers Slot tournament. Fans of this juicy game will be thrilled to hear that they can enjoy this brilliant Slot as part of the August Accumulator tournament. For an entry fee of just CA$1, players will gain instant access to a prize pool that starts at a minimum of CA$500 and continues to grow!

Microgaming has become renowned not just for its incredible games but for its popular Slot tournaments, too. Only recently one of its largest ever multiplayer tournaments, Reels de Janerio, came to a close after an extremely successful run. Microgaming’s multiplayer tournament spokesman, James Ford, commented, “We’ve had a busy few months with multiplayer. Not only have we continued with our monthly new games releases, such as Sweet Harvest tournament Slot, but we’ve also had one of our biggest ever multiplayer tournaments, Reels de Janeiro. And there’s no sign of things slowing down; our operators and their players can expect more games and more big tournaments in the coming months!” The successful Reels de Janeiro tournament was focused on the excitement of the football World Cup in Brazil and used the football-themed Shoot! Slot as the game of choice. Over the seven week contest, 75 lucky players won a variety of cash prizes from a total prize pool worth CA$175,000.

This delightful game was launched just over a year ago features the popular 5 Reel, 20 Payline layout. Set, as you may have guessed, on a farm, the brilliant animations and illustrations in this Slot are packed with pastoral items and jovial countryside characters. Play the Microgaming Sweet Harvest Slot tournament today until the end of the month at any of the top online Casinos, including Betway Casino, EU Casino and Jackpot City Casino.