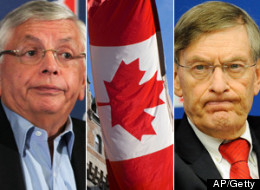 Canada’s hope for an end to illegal online gambling could be coming soon with support growing for an amendment to the Canadian legislature calling for a ban on illegal betting.

The C29NOW.ca website is the countdown to the amendment of the C29 Bill, which will cease illegal sports wagering and start returning offshore revenue back to Canada. In Canada it is estimated that C$14 billion is being wagered annually on single sporting events at offshore online betting sites. This has sparked support of deleting Section 207(4)(b) from the Criminal Code and include the amended C290 Bill. This will ensure that Canadian citizens are permitted wagering on the outcome of single sporting events. Joe Comartin, M.P. for Windsor-Tecumseh said that “Passing Bill C290 will mean Canadians will have the opportunity to make fair wagers in safe, secure, regulated environments. It will also mean hundreds of millions of dollars of revenue will stay in the Canadian economy, supporting jobs and communities.”

The amendment of this Bill has a lot of potential for the Canadian economy. By passing it there is the promise of new jobs, tourism and economic opportunities across the country. By allowing single events sports wagering this could add one million visits to the casino, creating over 150 jobs and have a great impact on the community by regulating fair gaming policies. In a recent Liberal Senate Forum, Senator Terry Mercer asked the Assembly for support in taking the power back from illegal gambling operations run by organised crime groups, so Canada can benefit from legal and safe betting.

Mercer argued against the myth that illegal gambling would still continue despite the introduction of the Bill by comparing it to the Atlantic Lottery Corporation. Mercer said that “One hundred per-cent of their profits go back into Atlantic Canada’s community for things like social programmes, roads, education and hospitals…The change proposed in this Bill does not create a new gambling product, but merely services to regulate an industry that currently resides in the hands of organised crime.”

It is estimated that organised crime ventures are raking in up to C$10 billion and C$4 billion through offshore websites. Currently, there is a majority vote in favour of tackling this problem, with 64% of Canadians wanting the Senate to pass Bill C290 and 75% agreeing that it’ll allow greater regulation of the gambling industry. The Federal Minister of Justice has received letters from eight provinces in support of the Bill, including British Columbia, Alberta, Saskatchewan, Manitoba and Ontario. Anyone wishing to support the Bill is encouraged to visit the C29 website and sign the petition.