The Historic Flamingo Hotel and Casino 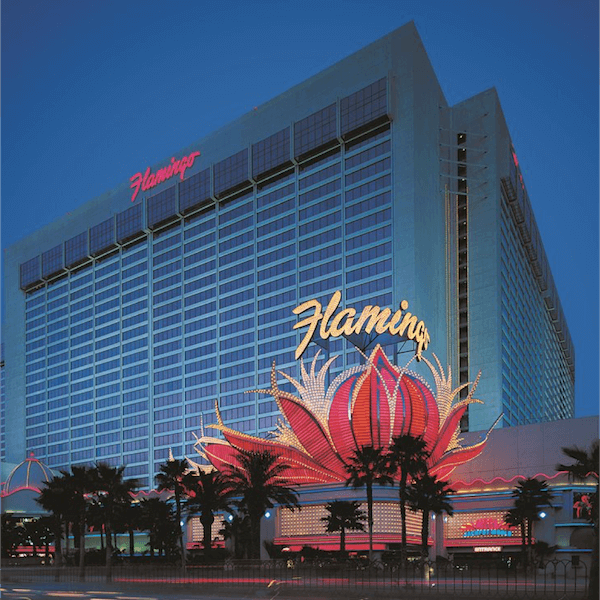 The Flamingo is an iconic and hugely recognisable landmark on The Strip in Las Vegas. It was the third establishment to open its doors on this famous stretch, and is the oldest that still stands, with all others having given way to larger, newer developments. In the decades since its first launch, The Flamingo has been through different names, upheavals and ownerships. It’s great being able to play at online casinos from the comfort of your own home, but as part of the wider gambling community it’s also important to learn a little of the oldest and most respected gaming institutions. As part of the very fabric of Las Vegas, and with a huge influence on various aspects of popular culture, the Flamingo definitely falls into this category.

A Microcosm of Las Vegas

It’s impossible to capture all of The Flamingo’s detailed history in a single article, but there are some important facts covered here that are as good a place as any to start learning about the resort and casino. Many people have been struck by the fact that the development of The Flamingo is, in some ways, very similar to the development of Las Vegas as a whole. The establishment was first conceived when Vegas was little more than a settlement with promises of what legalised gambling could bring. As it developed into a luxury destination that was the first of its kind, it had shady dealings with organised crime and was funded and owned by individuals connected to the mob in different ways. Today it has shed that image and is owned and operated by the Caesars Entertainment Corporation.

Billy Wilkerson, who owned The Hollywood Reporter and several successful nightclubs, bought the land for The Flamingo in 1944. His vision was to build a European-like casino, complete with a spa, golf course, nightclub, upscale restaurant and much more. The Flamingo was the first resort to offer all of this, and is often credited with creating this Complete Experience that most casinos and resorts in Las Vegas now feature. Mobster Bugsy Siegel was interested in Vegas because of the legal gambling and off-the-books sportsbetting opportunities that he had heard about. When Wilkerson needed more funding Siegel and some underworld associates posed as businessmen and stepped in, beginning what was ultimately a long and convoluted connection between organised crime and The Flamingo. After some false starts and challenges, The Flamingo Hotel and Casino opened its doors on 26 December 1946 at a total cost of $6 million. It had to close and was re-launched in March 1947 as The Fabulous Flamingo, but since then has been very successful.

Now called The Flamingo Las Vegas, the establishment has been completely rebuilt, but retains the same Art Deco and Streamline Moderna style of the original. Its garden court features a wildlife habitat that is home to real flamingos, and several major artists have headlined at The Flamingo over the years. It remains a rich, living piece of Las Vegas heritage.