The iPhone X vs the Samsung Galaxy Note 8 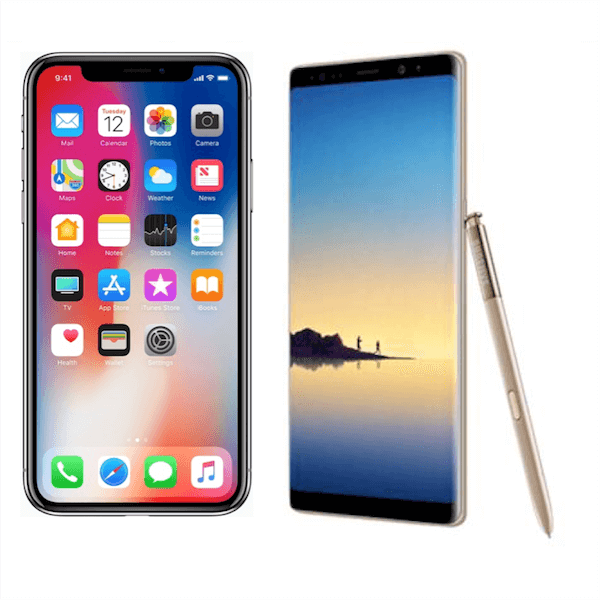 The Samsung Galaxy Note 8 and the iPhone X were both released recently amidst much fanfare. Each is the new flagship smartphone for their respective companies, and both phones had their fair share of expectations to live up to. The iPhone X was mired in rumours and leaks up to its November release, and the Galaxy Note 8 had the unenviable task of mitigating the fallout from last year’s exploding Note 7 devices. Now that both phones have been launched, everyone is wondering how they compare according to different criteria including, of course, their mobile casino game capabilities. Let’s weigh them up and see how they fare.

The Note 8 has an 8-core Snapdragon 835 processor, while the iPhone X has a 6-core Apple A11 Bionic one, both of which are 10 nanometres. The Snapdragon 845 processor would put the Note on a more even keel with the iPhone X, but it does have 6 GB of RAM, which is twice as much as the iPhone X’s 3 GB. Android 7.1.1 is used in the Note; iOS 11.2 in the iPhone X. They use the ARCore and ARKit Augmented Reality systems respectively. The Note 8 uses iris scanning security biometrics, while the iPhone X uses Face ID. This is a significant difference not only in the performance of the biometrics themselves, but also because the Face ID sensor array is mounted in the contentious notch on the iPhone X screen and because the cameras allow for innovative new animojis as well as Face ID.

The extra RAM allows the Note 8 to switch between apps with more ease than the iPhone X, and is the better option if you are going to be multitasking through several different applications throughout your day. Having said that, the iPhone X performs far better than the Note 8 in benchmark tests and seems to load heavier apps such as Grand Theft Auto and Minecraft a lot more quickly.

Much has been made of apps not loading properly or quick enough in the iPhone X, and of certain games appearing the same as if they were on the iPhone 8 due to cropped edges. This is valid, but it should also be remembered that many apps have not yet been optimised for the iPhone X and when they are, this could make a big difference. In addition, some games and other apps are also not currently optimised for the Note 8 creating similar issues. Samsung’s iris scanning was definitely faster than Face ID, so you’ll be able to get going a little faster with a Note 8.

The handsets play video quite similarly, but when you’re playing casino and video games that cannot buffer you might notice better performance on the iPhone X. The performances of ARCore and ARKit are very similar.

Which Phone is Best for Casino Games?

The screens of both devices are edge-to-edge, making for a more immersive gaming experience, but at 6.3 inches the Note is considerably larger than the 5.5-inch iPhone X. The VR capabilities of both the Note 8 and the iPhone X should add a thrilling new dimension to mobile casino games. In terms of processing, if you are playing live dealer or 3D games the iPhone X is the better option and will deliver smoother gameplay.

If you’re a serious player who accesses mobile casinos every day this is definitely something to consider, but it does depend on whether or not you can get over the notch in the iPhone X screen. It can take some serious getting used to, especially in landscape mode, and Apple has stipulated that no apps be designed with features that minimise its appearance! In the end, the handsets perform very similarly, but the iPhone X can do a little more heavy lifting and will probably start to perform even better as more apps that are optimised for the device are rolled out. On the other hand, if you use your device for many more daily activities than gaming, the Note is a worthy contender.

The choice is yours; both phones are pretty remarkable.