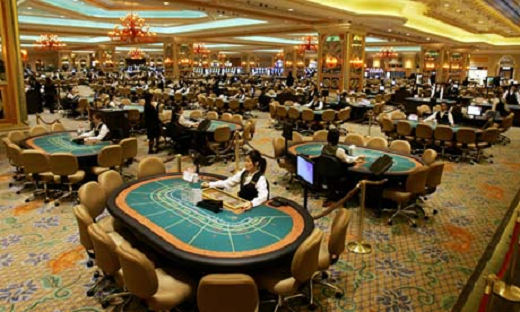 The number one largest casino in the world is the Venetian Macau, located across the street from the City of Dreams. This virtual paradise for gamblers is run by the world famous entrepreneur, Sheldon Adelson. Mr. Adelson also owns the Las Vegas Sands. The Venetian was the first casino to open its doors on the world-renowned Cotai strip of Macau. This gigantic casino has over 545,000 square feet of space. It features an astounding 3,000 gaming machines along with 870 table games. Visitors could spend months playing and never play the same game twice. There are 24 premium restaurants with an amazing 3,000 hotel rooms. It is one of few overseas hotels with a famous Cirque Du Soleil attraction known as Zaia. Cirque shows are normally found in Las Vegas. The Venetian in Macau has become a famous destination for gamers from all over the world.

The former Portuguese colony of Macau on the coast of southern China is home to many world-famous luxury casinos. Coincidentally, it is also home to five of the worlds largest casinos out of the top 10 largest. Attracting gamblers from China and all over the world, the second largest casino in the world is the City Of Dreams Resort in Macau. The City Of Dreams Resort is an expanse of 420,000 square feet featuring 1,350 different gaming machines and 520 poker and table games for punters to play. There are also an amazing 1,400 hotel rooms along with 14 excellent restaurants for gamers to enjoy when they're not busy playing their favorite games. This is one of the hottest casino spots in the world on the Cotai strip. City of Dreams is owned by Australian billionaire James Packer and by Lawrence Ho from Melco Crown Entertainment. This complex cost an estimated $2.1 billion dollars to build. It is a gamble that has paid off handsomely for its investors.

The largest casino in the United States is also the reigning third largest casino in the world. The surprise is that it is not located either in Las Vegas or on the Atlantic City Boardwalk in Atlantic City, New Jersey. In fact, the third largest casino in the world is the Foxwoods Resort Casino in Ledyard, Connecticut. Managed by the Mashantucket Pequot Indian Tribe, the Foxwood complex boasts a massive 340,000 square feet of space with 7,000 gaming machines and 400 table and poker games. Visitors also enjoy 29 unique restaurants and there are 824 hotel rooms for them to stay in when they visit Foxwoods Resort Casino. The Foxwoods Resort complex opened its doors in 1986 in western Connecticut. The resort benefits greatly by its location, which is close to New York and Boston. Gamers enjoy the variety of games available including 100 tables devoted exclusively to poker, along with 17 other table games to play. In addition, Foxwoods Resort Casino has one of the largest bingo halls in the world.