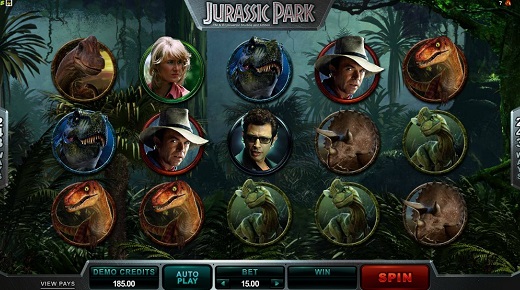 2014 has certainly been an exciting years in the Casino games industry with dozens of great new Slots appearing at our favourites Casinos every week. We’ve compiled a list of our favourite of this year’s Slots so read on to see what got our pulses racing this year:

There were two incredible TV show slots that we thought were spectacular this year – Games of Thrones and South Park.

This long-awaited Microgaming Slot was released just last month and features all of the popular characters from the hit TV show. It was always going to be a success as it is based on an incredible show with a massive following, but Microgaming’s top developers created a slot that was beyond even our wildest imaginations. It’s a 5 Reel, 243 ways-to-win Slot but the best thing about it is the clever use of Game of Thrones story-lines to create the action-packed bonus features.

South Park is one of the biggest and best animated TV series of all time. The South Park Slot is a 5 Reel, 25 payline game with Free Spins, Sticky Wilds, 3 bonus games based around the characters and tons of brilliant rewards.

There have been several great movie Slots released by the top developers this year but our favourites are, without a doubt, Aliens and Jurassic Park Slots. Both of these games are based on timeless classic films so you just know you won’t get bored of playing these Slots.

The Alien movie series is one of the most thrilling in history and this year’s game manages to pack all of that excitement into an incredible new Slot. Net Entertainment have created a 3D slot that looks just like Ridley Scott’s award-winning movie and featuring live-action scenes. There are three different levels in this slot which will take you on a journey with huge bonuses waiting to be won.

It was almost inevitable that someone would create a Jurassic Park Slot considering the success of the ground-breaking movie and we were thrilled with Microgaming’s impressive design. This 243 ways-to-win game is 65 million years in the making and packs some serious prizes to lucky winners on this prehistoric adventure.

Microgaming took a risk when they decided to release their Playboy Slot but it turned out to be incredibly well-calculated. The Playboy Slot has proven itself to be the hottest, sexiest game in the industry and a totally thrilling experience.

To play any of these incredible 2014 Slots today visit our Casino Reviews page and head over to one of our top recommended Casinos for a Welcome Bonus worth up to CA$1000s!