Top Gambling Superstitions and their Origins 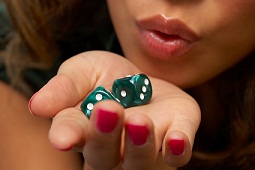 It is very common for superstition and gambling to go hand in hand, especially due to the fact that a part of gambling is luck. There is no skill involved in spinning a Slot, casting dice or spinning the roulette wheel, so whilst luck plays a huge role in this, there are many people out there who believe that superstition plays an even bigger role. We’ve taken a look at some of the strongest superstitions and had a look into their origins.

Perhaps one of the most famous superstitions, crossing your fingers, is not just limited to the casino. People often cross their fingers when they are hoping for a certain outcome or wishing for something to happen. There is no true origin to this but it is generally attributed to a fear of witches from back in the Middle Ages. Apparently by making the sign of the cross, witches could be warded off. Another version is that crossing your fingers this way was a pagan ritual believed to wish someone well. Either way it’s meant to wish something positive and is still used today, though to be honest a witch’s help would be useful in the casino!

This is one of the most common superstitions but one that can really ruin a gambler’s evening. No matter how much preparation they’ve had, if a gambler knocks salt over onto their steak tartare, it’s more than likely they’ll head straight home rather than hitting the tables. This is one superstition that players take very seriously and it dates back to the Roman times when salt was a valuable commodity. It was often used as payment for soldiers and if it was spilt, it was considered as unlucky as you’d anger the spirits of good will and good fortune. The only remedy was to throw a pinch of salt over your left shoulder with your right hand. This tradition still carries on to this day. Just make sure you don’t throw the whole shaker!

You’ll often hear people end their sentence with “knock on wood” or “touch wood” and then proceed to find something wooden to tap. This isn’t just a superstition used in casinos but everywhere and is used to ward off bad luck and hope for something good. The origin for this superstition can be found in trees (makes sense really!).  In pagan times there was a belief that trees possessed spirits and by touching a tree you’d acknowledge its divine power and it’d protect you from bad luck. The Church adopted this rite and claimed that by knocking on wood you pay homage to Jesus Christ, who died on a wooden cross.

Everyone’s heard about the lucky rabbit’s food, you might even have owned one (or still do) yourself, but do you know what magical qualities a rabbit’s maimed limb is supposed to bring? The common legend is that it came to the US from Africa where the rabbit was regarded as a symbol of fertility and fortune. So, by carrying around a rabbit’s foot you’d be fortunate and erm…fertile.

Or in other words, the fear of the number 13. One of the most universally feared numbers, 13 causes an irrational fear – people won’t travel on the 13th, there’s no 13th floor in buildings and it even has its own medical condition (Triskaidekaphobia). Although this fear has lasted for many years, its origins aren’t completely clear. The oldest case is from an ancient law code called the Hammurabi that lists laws passing straight from 12 to 14 with no apparent reason.  One important event happened in 1307 on October (guess the date) and it was on a Friday no less! This is when the Knights Templar Order was arrested by King Philip of France and put to death. Throughout history there are many other incidents where 13 and often Friday appear together, all boding bad luck and ill fortune and it seems this has carried on to present day.