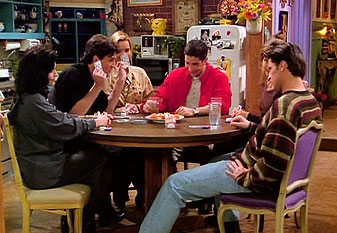 Everyone knows that Casinos are great entertainment and perhaps that is why they always seem to make an appearance in all of the best TV shows. Whether you like playing online, on your mobile or at a real-life Casino it’s hard not to enjoy watching your favourite characters spinning some Slots, or trying their hand at Blackjack. I’ve decided to recap some of my favourite Casino moments to share with you; if you haven’t watched them before then I highly recommend you do so now – just don’t necessarily take any tips from them!

Joey is supposed to be filming a movie, but when it gets cancelled he ends up working as a gladiator in a Vegas Casino; the gang go to visit him and, after a fight with Chandler, Monica ends up playing Craps which she ends up having quite the knack for. Meanwhile, Ross and Rachel draw on each other’s faces with indelible marker and proceed to devour the mini-bar, and Joey finds his identical hand twin at a Blackjack table. Monica and Chandler let the dice decide if they should get married, but Ross and Rachel beat them to it. We’ve all probably watched it a thousand times, but it’s still hilarious.

Howard gets dumped by weird Leslie, so Leonard and Raj take him to Vegas to cure his depression. This episode follows the classic formula that seems to work so well in every TBBT episode; the boys struggle to interact normally with members of the opposite sex. My favourite line of the whole episode has to be:

Raj: I'm telling you, Leonard, video slots, free drinks brought to us by a bosomy barmaid, all you can eat shrimp for $3.95? Disneyland can suck it. This is the real happiest place on Earth.

(or How I Learned to Stop Worrying and Love Legalized Gambling)

When Springfield decides to legalize gambling to revitalize its economy, Homer gets a job as a Blackjack dealer, Marge has a bit too much fun and Bart, being too young to play at the Casino, sets up his own Casino in his tree house. The episode contains a host of cultural references to films including Dr. Strangelove or: How I learned to Stop Worrying and Love the Bomb, The Wizard of Oz, Rain Man and 2001: A Space Odyssey, as well as featuring James Bond himself.

4. How I Met Your Mother – Atlantic City

There are quite a few Casino moments to choose from in How I Met Your Mother, but Lily and Marshall attempting to get married in Atlantic City is one of my favourites. Upon arrival they discover that, unlike Las Vegas, it takes three days to get a marriage license in Atlantic City. Ultimately they have to ask a sea captain to take them out to international waters to marry them. The captain agrees but says he will charge $10,000, so Barney attempts to win the money by playing a Casino game called xing hai shi bu xing. Everyone seems to be very confused by the game, which involves tiles, cards, switching seats, a Roulette wheel and a jelly bean, but Marshall picks it up quickly and helps Barney to win. After it looks like the nautical ceremony will finally go ahead, Lily and Marshall decide to wait after all. It’s exhausting to watch, but totally LEGEN-wait-for-it-DARY!

5. Friends – The One with all the Poker

Technically this one isn’t set in a Casino, but they do play a lot of Poker. There’s one moment that cracks me up every time: [Ross is returning from the bathroom, preparing to play Poker with Rachel]

6. The Fresh Prince of Bel-Air – You Bet Your Life

Whilst on a road trip to visit colleges, Will and Carlton decide to stop by a Casino in Las Vegas where they incur the wrath of heavyweight boxing champion Riddick Bowe (a household name back in 1993 when this aired). Will’s dim-witted but loveable best friend, Jazzy Jeff, turns out to be hiding in the trunk of the car, and Casino-themed chaos ensues. The episode is a corker and worth a watch if only for this line:

Will: Jazz, I thought you said you knew how to play poker!

Jazz: Poker? You mean this isn't Go-Fish?   If you have a favourite TV show that features a Casino then Like our NEW Facebook page, or Follow us on Twitter, and tell us all about it. We’ll be offering tons of exclusive competitions and offers for our Facebook and Twitter followers so join now to see what you could win!