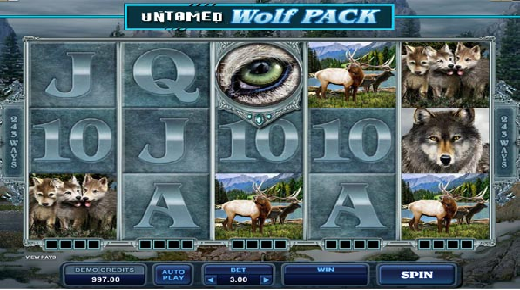 Fans of the popular Untamed series by Microgaming were thrilled recently by the release of its third game called Untamed Wolf Pack. Other games in the series include Untamed Bengal Tiger and Untamed Giant Panda which were both released earlier this year. This five reel slot is among the favorites of online pokies players and aficionados of online casino games. Bright and colorful graphics combined with beautiful Arctic scenery including mountains and lush green forests attract new players to this game. Once they begin to play and realize what fantastic, fun features are in this game, they become hooked. The players experience is more exciting with four features allowing punters to win in several exciting new ways.

The four ways to win big include Your Gamble, Lucky Nudge, Collect-A-Wild and Running Wilds. Combining the thrill of potential wins with stellar graphics is an excellent way to attract players to these Untamed series games, and one that Microgaming uses again successfully with the release of Untamed Wolf Pack. The Your Gamble feature of Untamed Wolf Pack is exciting in that it allows punters to adjust their own odds, something unique to this game. It allows players the option to bank any amount of their winnings and play as many times as they want to in a single win. Lucky Nudge increases a gamers chances of winning by featuring scatter symbols that can appear at any time, triggering free spins. The scatter symbols can show up below or above the edges of reels, adding an extra dimension of excitement and unpredictability to the game. The ability to stack winning opportunities is found in the Collect-A-Wild feature.

When wild symbols land on the reels, they are collected and once four wilds are collected, the entire reel becomes wild and stays that way for the players next four spins. Running Wilds appear when the free spin feature is activated. The wild symbols are stacked and collected and by the tenth free spin there is a chance that the stack can grow to a remarkable twelve symbols high. The way this game is played combined with stunning graphics is likely to keep Untamed Wolf Pack players completely entertained and coming back for more. Microgaming is renowned for a passion for striving to create bolder and better games and this passion is showcased in Untamed Wolf Pack.