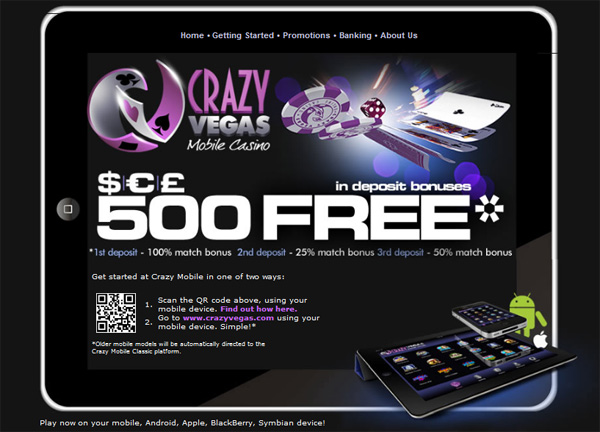 New players get up to CA$500 in Bonuses to take on the most popular Slots game, Thunderstruck II, on mobile. The number one favourite amongst online Slots players can now be played on mobile devices anytime, anywhere. Thunderstruck II has roared into the Crazy Vegas Mobile Casino catalogues, adding to an assortment of other powerful game titles. It’s easy to see why Thunderstruck II is so popular. A sequel to the highly successful Thunderstruck,

This slot is a 5 Reel, 243 Ways to Win Video Slot based on the Norse God of Thunder. In this title he continues his quests along with other ancient Norse Gods, depicted in all their glory in the realm of Asgard. The game includes a multitude of bonuses including a WildStorm feature in which Thor’s lightening can turn 5 Reels Wild. There is also a Great Hall of Spins, where successive chambers lead to godly prizes. Other famous characters such as Valkyrie, Loki and Odin bring their own rewards, with Odin packing as much as 20 Free Spins and 6x multipliers. While in Thor’s own chamber a thunderous 25 Free Spins await. Casino manager and spokesperson, Harry von Schlussel, said, “Thunderstruck II is a personal favourite game of mine. The mighty Thor can be a very generous guy especially when he gets into a thundering mood. I’m sure this game will remain a popular choice on mobile.”

Crazy Vegas Mobile Casino offers a wide variety of games including Progressive Jackpots, Roulette, Blackjack, Video Slots and more. All powered by leading online gaming software developer, Microgaming™, they feature stunning graphics and smooth gameplay. New players at Crazy Vegas Mobile Casino receive a 3-tier deposit Bonus Welcome offer when they sign up. Upon their first purchase, they will receive a 100% Bonus up to CA$150, on the second they will receive a 25% Bonus up to CA$200, and on the third deposit they will receive a 50% Bonus up to CA$150. In total, new players can receive as much as CA$500 free after their first three deposits. All personal and banking information is safe and sound with 128-bit encryption technology, a trusted industry standard, and a range of banking options are accepted from credit cards to web wallets. Should any queries arise, a dedicated team of multi-lingual support staff are available around the clock. They can be reached either by email, toll-free number or live chat.