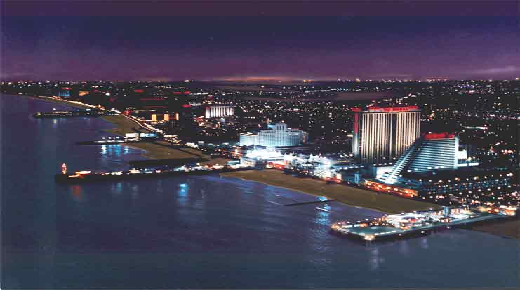 That old adage what's done in Vegas stays in Vegas may acquire a new meaning especially for people on the East Coast of the USA. As more casino-style gaming operations expand and opinions of residents in a number of states change, not everybody will need to go to Vegas to satisfy their gaming desires. According to latest reports, Atlantic City, New Jersey, has recently sealed a deal with Mr. Margaritaville, Jimmy Buffett, to breath new life into the state's first casino. Resorts Casino, opened in 1976, is the site for a new complex of restaurants, bars, and gaming operations. One landmark on the boardwalk in Atlantic City, the Steel Pier, will be rebuilt as a part of a $2.6 billion dollar boardwalk revitalization project.

The pier was heavily damaged by fire in 1988. The new Margaritaville Cafe will have 400 indoor seating capacity with an additional 40 seats outside right on the boardwalk. In keeping with the Buffett style, there will be a Landmark Bar&Grill on the beach which will operate 365 days a year. A special feature in the casino area will be the Five O'Clock Somewhere Bar. State-of-the-art renovations will be undertaken at the Atlantic and Tropicana casinos. Governor Chris Christie also approved plans for the Boardwalk Revitalization Commission to spend $13 million yearly over a five-year period to attract non-gaming entertainment entities to the boardwalk as well as other areas of the city.

Negotiations are currently taking place between Boyd Gaming and Florida Panthers hockey team owners to build a casino is the Sunshine City area. Local officials view this move as a positive step to boost the local economy. Boyd Gaming views Sunshine City as a promising venue due to its close proximity to two theme parks and a very successful outlet mall complex. State approval will be required for licensing since gaming operations are currently restricted to Native American tribe reservations. Massachusetts appears to be following in the footsteps of Maryland by attempting to keep the money that's made in the state played in the state. In discussions regarding gaming in Maryland, officials were quick to point out the number of Maryland license plates occupying parking areas in Charleston, West Virginia. Massachusetts officials have observed the pathway residents pursue to reach gaming facilities in other New England states.

Negotiations are currently underway with the Mashpee Wampanoag Native American tribe to build a casino in Tauton.