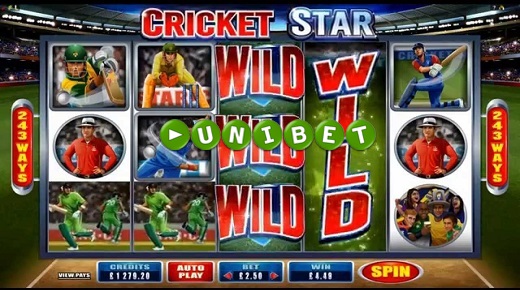 Sports fans, pay attention! To honour the launch of Microgaming’s sensational new slot Cricket Star, Unibet Casino is offering the chance for you and a friend to win a trip to watch the final of the Cricket World Cup 2015 in Australia! How Does it Work? In order to enter the prize draw, you simply need to play this fantastic new Cricket Star slot and you’ll be granted an entry into the promotional draw. Just follow these steps to boost your winning chances:

As you might have guessed you can maximise your chances of winning in this competition as the more you play, the more entries you’ll receive into the competition! Promotional Period The contest runs between 4 February 2015 and 2 March 2015 so you’ll want to hurry over to Unibet Casino as soon as you can to give yourself the best chance of winning this sensational prize. The Prize The winner of the draw will win an all-expenses paid trip to Australia, with a friend, to watch the final of the Cricket World Cup at the Melbourne Cricket Ground on Sunday March 29 2015. Specifically you’ll receive:

The Draw The prize draw will take place on the morning of Tuesday 3 March 2015 and the lucky winner will contacted immediately by a member of customer service team.